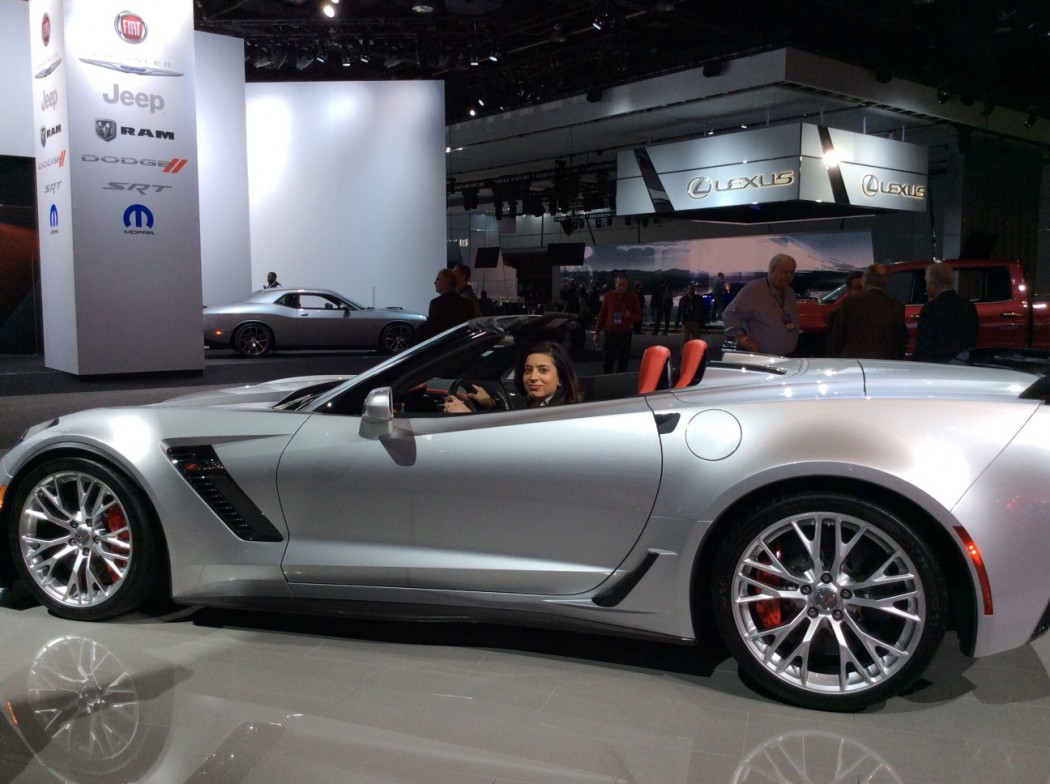 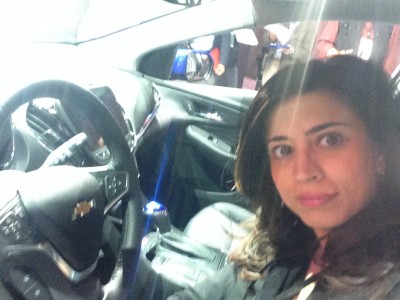 As a reporter and journalist who has had some amazing opportunities covering stories over the years, being part of the Canadian team with Chevrolet Canada at the North American International Autoshow was an exhilarating ride. (excuse the pun!).

The thing that set my experience apart from any other usual media story was that we had unprecedented access to several heads of GM  in many areas including, marketing, product development, sustainability and design. The result was that we got a behind-the-scenes experience of not just what it takes to put a reveal together but also what makes a great vehicle.

As a mom, I felt that coming out of the three-day media experience with Chevrolet Canada made me a more informed driver as well.  I learned about information that I think many of us walking into dealerships would benefit from and help us as women make better decisions when buying a family vehicle. As a journalist, I actually felt like I was ‘part of the action’ instead of just ‘reporting on the action’! 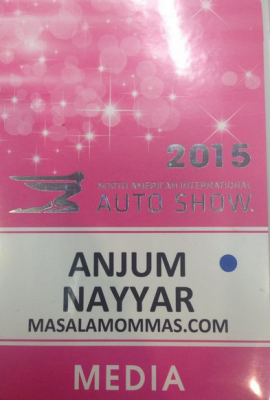 Attending the Buick Reveal on Sunday was our first stop on our media tour. With a packed house at Detroit’s historic Eastern Market, amazing food, a Buick Social media team station on site and singers, this reveal was quite the show. Buick unveiled its all- new Buick 2016 Cascada, a convertible. 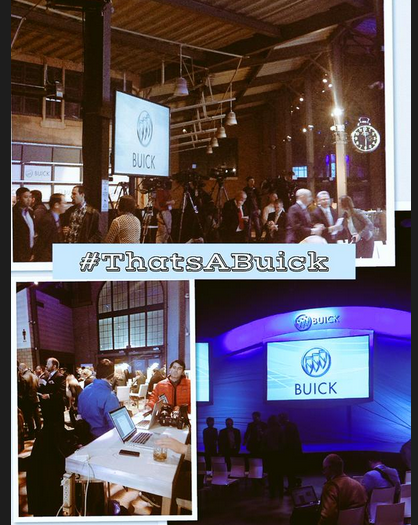 Here’s what you should know about the Buick Cascada: If you’re looking for a spacious convertible with clean lines that won’t break the bank, the two-door Cascada is worth the wait. This mid-size ride will be available in early 2016 and is priced at approximately $30k. It won’t be available in Canada but will be in the US.  The power-folding soft top comes down in 17 seconds and can lower at speeds of up to 31 mph! 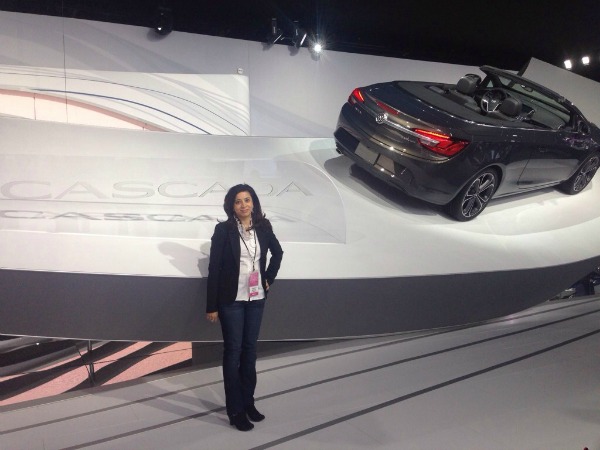 Just when we thought the event was over, singers arose from the audience and took to the stage as a surprise reveal of Buick’s new concept car was driven out on stage. Now this car was a stunner. Whether you’re a car buff or not as a mom, the look of the Avenir was simply amazing. And design experts agree because The Buick Avenir Concept Car received Best Concept Vehicle and Innovative Use of Color, Graphics, and Materials. 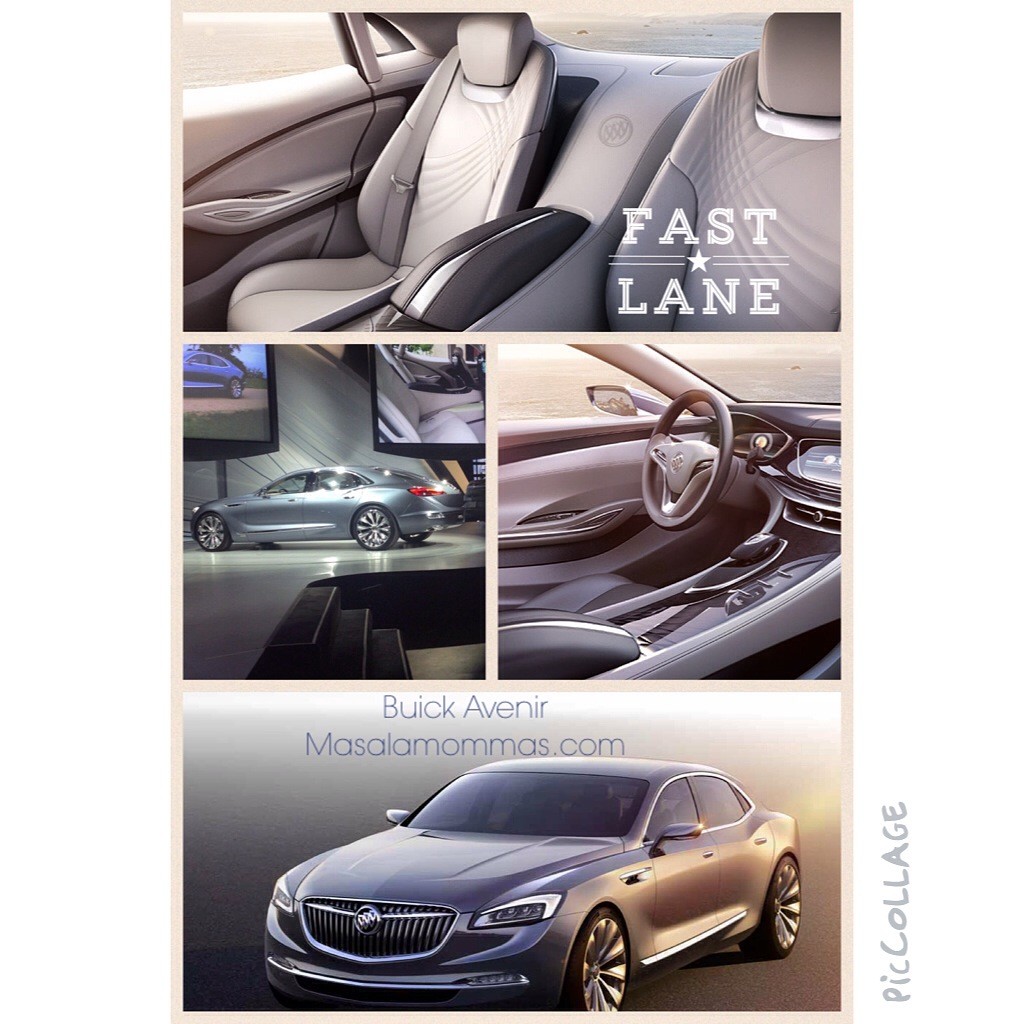 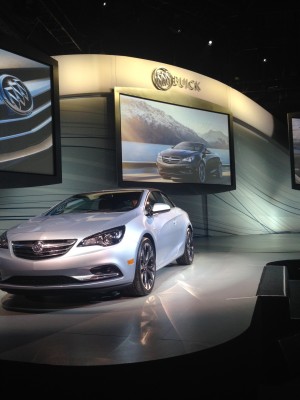 Watch this video of the reveal:

We had the opportunity as I mentioned to meet with heads over at GM during the show and I had a chance to ask Buick’s Director of Marketing, Molly Peck, which car in Buick lineup currently she would recommend for masalamommas.

Next up on the new hot vehicles revealed at this year’s autoshow was the next generation all-electric Chevy Volt and Chevy Bolt concept. The Chevrolet Stage at Cobo Hall was surrounded by a full house of top news organizations across North America vying to be part of the big reveal. 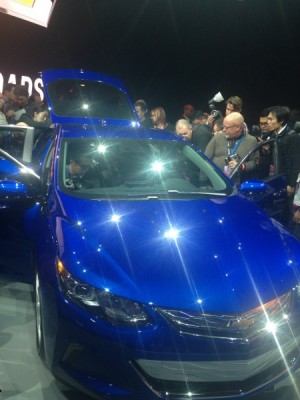 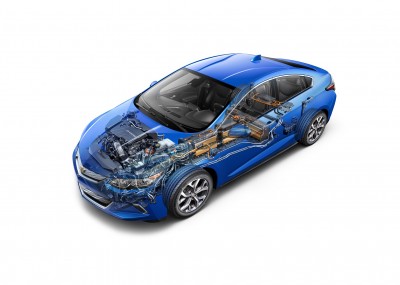 And that when that shiny Cobalt blue Chevy Volt came out from under its cover it definitely lived up to the standards that CEO Mary Barra and North American President Alan Batey shared with the eager audience. They stated that the new Chevy Volt was built on much of the feedback from several Chevy Volt owners several of which were present in the front rows of the audience.

Check out the video of the Chevy Volt and Chevy Bolt Concept!

The all new ChevyVolt has a stronger body structure because of its 1.5 liter 4 cylinder engine and quieter ride, five-passenger seating with option to have heated back seats, location-based charging capability. The batter is also much more efficient, it’s smaller with fewer cells and is set up in two packs instead of three, which makes it weigh 20 pounds lighter. These were all facts that we saw come to life during our visit the GM’s Chevy Volt Battery lab. 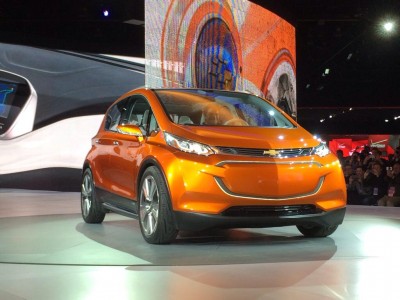 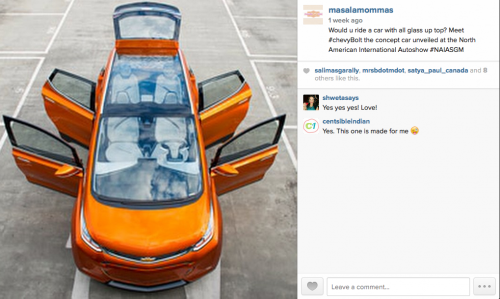 Whether you’re in the market for an electric car or have never even toyed with the idea, the Chevy Bolt concept car definitely gives moms like me something to think about. It’s Chevrolet Canada’s vision for an affordable, long-range all-electric vehicle designed to offer more than 300 kilometres of range starting around $30,000. The vehicle has all glass up top showing off the airy concept.

The technology can all be accessed by a smartphone with the concept Bolt EV Connect app, which is designed to:

Going behind the scenes to for a tour at GM’s facility that houses the lab the makes the Chevy Volt’s battery was an eye-opener. This is the location for the largest automotive battery lab in the world that engineered the battery pack for the new Chevy Volt. 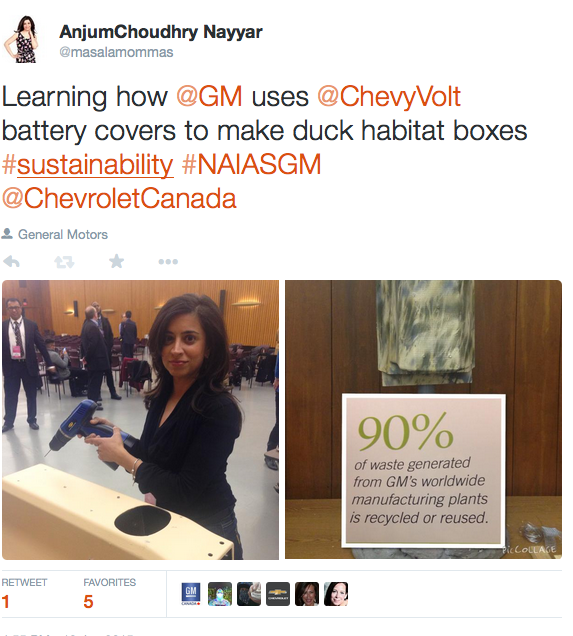 Here we got an inside look at the innovation that goes into battery that powers the new generation Chevy Volt and you’ll have to take my word for it, the lab was quite the experience but no pictures or videos were allowed. We learned how what cells in the battery look like, how they come together, why the battery is lighter and packs a bigger punch than previous the previous Volt.

Complete with our lab goggles we got an hour and half with product experts and also got insight into how GM is walking the walk when it comes to sustainability.

What you should know is that Chevrolet Canada uses old battery packs from the ChevyVolt to make duck habitat boxes and we got a chance to make one on-site!  Drill in hand; I got a chance to see how it’s done first-hand.

As a journalist meeting your colleagues and getting a chance to meet people you’d never otherwise meet on stories is such a great experience. So when our Canadian group of five was invited to an international media dinner with journalists from across the world for a chance to hear GM CEO Mary Barra, I was very excited. For most of us, it was the first time we had a chance to see Mary Barra since she took over as CEO. 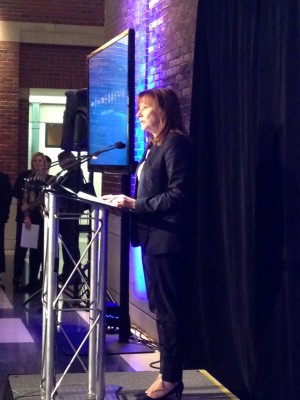 She spoke about the innovation that GM has and will be taking on including 4G technology and the advances of OnStar. 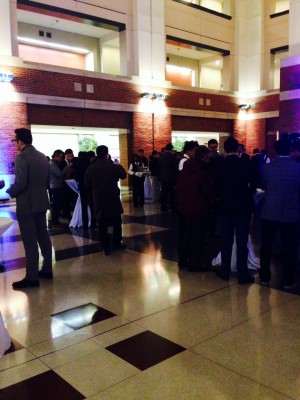 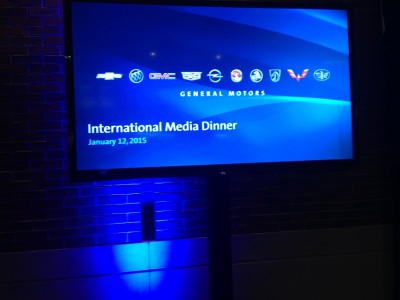 We were welcomed with a fabulous dinner with food stations of amazing food with a beautiful backdrop of the Rattlesnake Club. GM Canada’s President Stephen K. Carlisle was also on hand and we all got a chance to get to know him, his background and his work with GM in other countries including Hong Kong and Singapore.

Another insider-tour I had the chance to take was one to the On-Star command centre, which we’ve talked about before on masalamommas.com, but we learned some other great facts:

GM’s 4G connection will allow a driver to be alerted on battery life remaining and when it might need to be replaced. 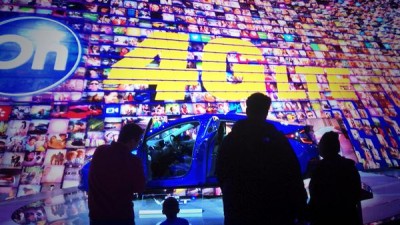 On our day two we had our last two big reveals, the CTS-V and ATS-V coupe and as stated by, President of Cadillac, Johan de Nysschen.

The @Cadillac V-series is the accelerator for the brand attracting younger buyers of the brand, Johan De Nysschen

I have always been a fan of Cadillac and own the Cadillac SRX myself so definitely agree that Cadillac is definitely not ‘your dad’s car’. I was really excited about these two reveals. With 640hp it’s one of the fastest cars in its class. 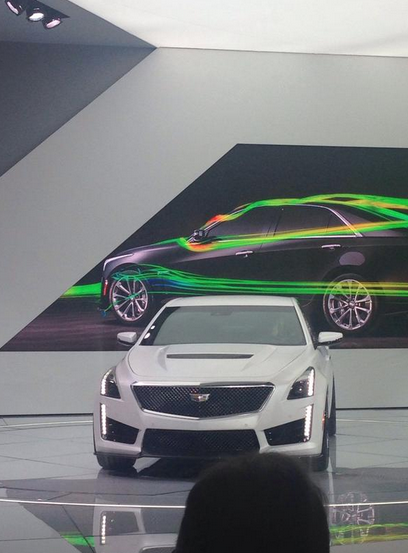 With a packed house and standing room only at the reveals I was able to duck into a row up front to get a closer look at this car. When it was driven out on stage there was a lot of ‘revving’ if you know what I mean. What a car!

In the Cadillac President’s  words, “Cadillac is ‘here to disrupt.” He went on to add, “We will challenge the market leaders head on, precisely where they are strongest.”

We had a chance to talk to Cadillac Brand Director, Mahmoud Samara, about the brand’s vision to reaching a diverse audience globally.

The first-ever ATS-V is also available in sedan and coupe and is another option for those of you who love to grip the road in style. 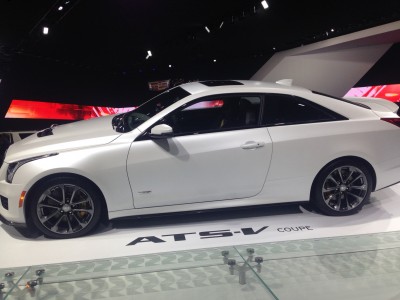 Before I left the Cobo Centre, I just had to check out the Chevrolet Corvette Z06. Even Jay Leno has been talking about it!
As you can see from the look on my face, I was pretty happy to end my day of note-taking, tweeting, and interviewing with a nice sit-down in this car. It’s being hailed as a world-class ‘supercar’ and offers a 7-speed manual or an all-new 8-speed paddle shift automatic. If you can get your hands on one, you may want to try and do a test-drive just for fun… 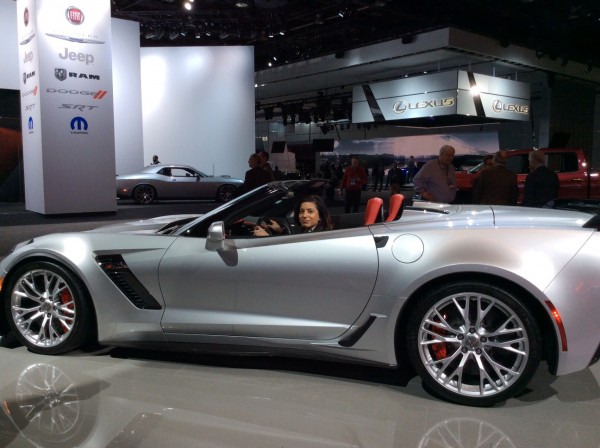 We ended Day two at the show on a high note with the GM Canada President’s dinner welcoming all Canadian media  hosted with GM Canada’s Stephen Carlisle. It was an intimate setting at Andiamo, in the Renaissance Centre where we were staying. A private room with amazing Italian food in the company of national and local Canadian media. 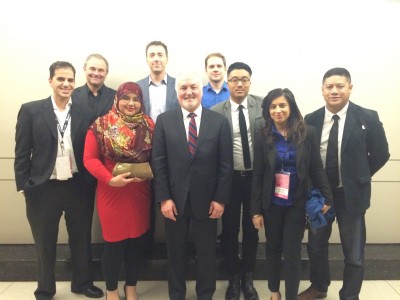 The North American International Auto Show is considered the ‘super bowl’ of all car shows and I for one was honoured to get a chance to get an insider’s look with Chevrolet Canada. If you ever do get the chance to go to auto shows, do it. It will not only be fun, but will make you a better informed consumer and driver when it comes to cars and how to choose the best ones for you.