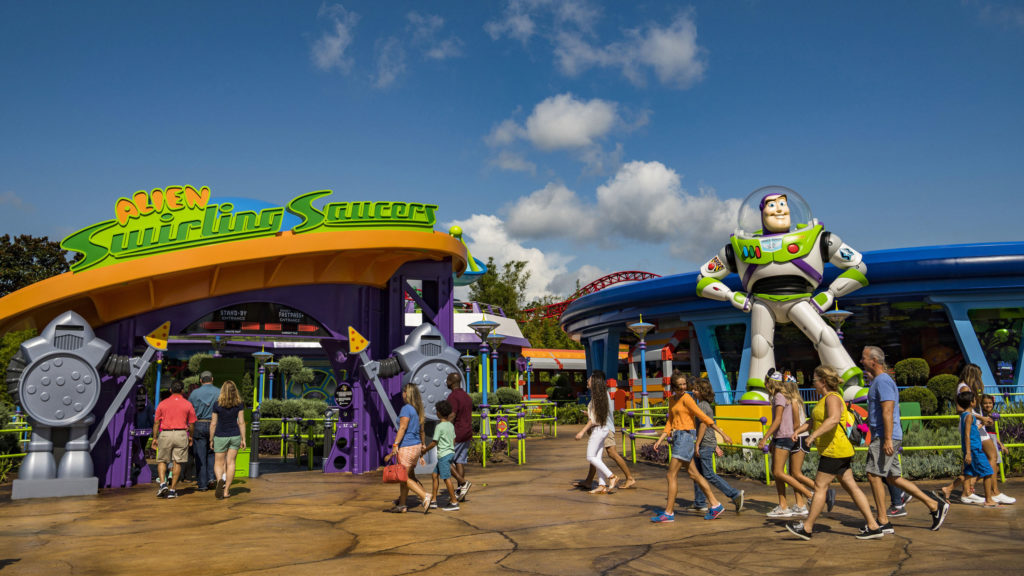 The new Toy Story Land at Walt Disney World’s Hollywood studios, inspired by Pixar Animation Studios’ Toy Story films, turns guests of all ages into “honorary toys” and allows them to PLAY BIG in the whimsical world of a child’s imagination. 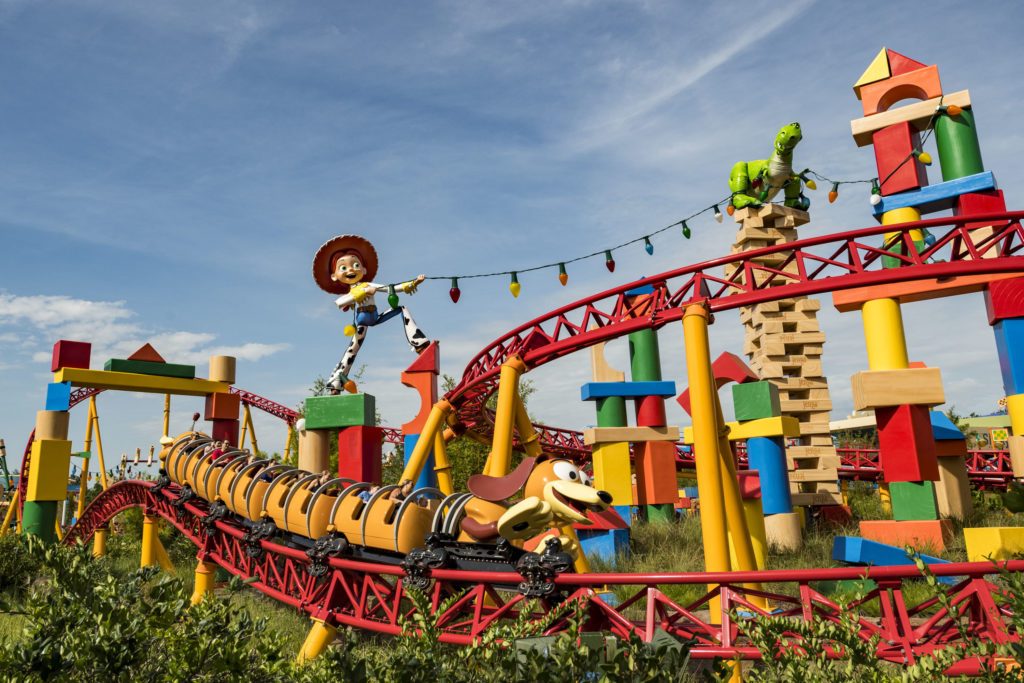 Toy Story Land includes two all-new attractions and a new entrance for an enduring favourite. Guests hop on Slinky Dog for a family-friendly roller coaster ride, take a spin with the little green Aliens from Pizza Planet and go for the high score in midway games populated by beloved Toy Story toys.

Toy Story Land also celebrates what defines entertainment for kids of all ages. Crayola crayons, a Rubik’s Cube, Cooties, and other toys and games pour on the nostalgia for park-goers – and fascinate young ones. With building blocks around every corner, there are lampposts shaped like Tinkertoys and benches built from Lincoln Logs and K’nex pieces. A balsa-wood glider, a Barrel of Monkeys, giant playing cards and jacks add to the visual tapestry of the new land. 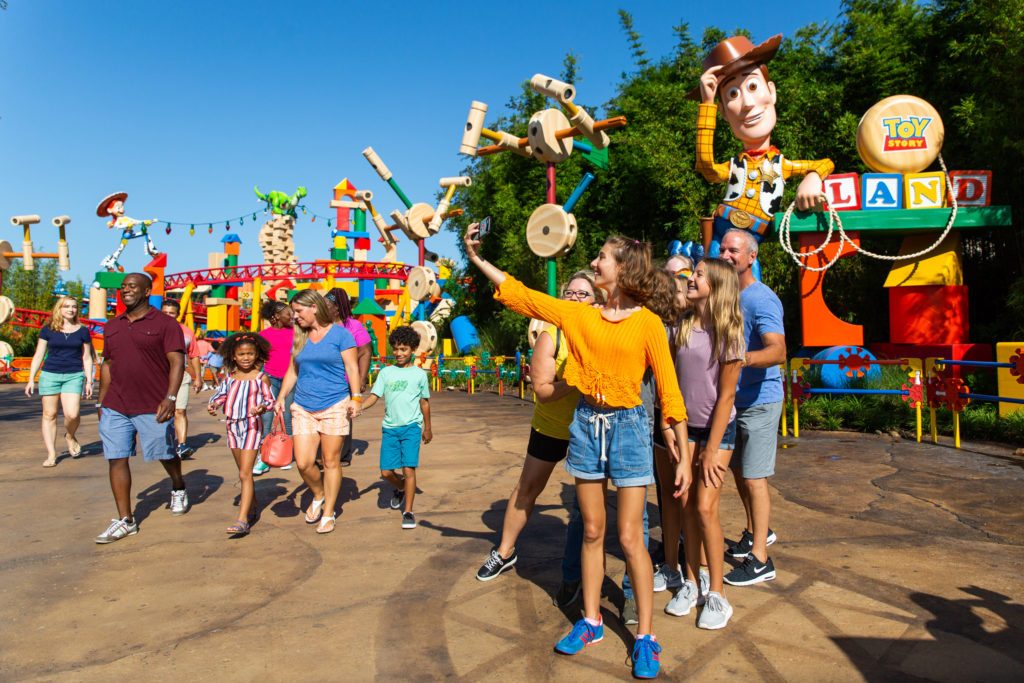 Sheriff Woody, standing nearly 20 feet tall, welcomes all to Toy Story Land by jauntily leaning on a tall assemblage of colorful wooden blocks, tipping his wide-brimmed hat to guests while holding onto his trusty lasso.

“With set pieces, staging, attractions and experiences, Toy Story Land represents the best of Walt Disney Imagineering’s collaboration with our storytelling partners at Pixar Animation Studios,” said Bob Chapek, Chairman of Disney Parks, Experiences and Consumer Products. “This new land will place guests inside the wondrous world of Woody, Buzz and their pals – and invite everyone to experience the joy of being a toy.”

From his Dash & Dodge Mega Coaster Kit, Andy has assembled his roller coaster for maximum family fun. But instead of just using the roller coaster vehicle that came with the kit, Andy has put his Slinky Dog on the track. The result is a family-friendly thrill ride around the backyard that includes two launches. Tracks and supports in bright colors of red, orange, yellow and blue were snapped together according to Andy’s hand-drawn plans. Rex and Jessie helped by stringing lights above Andy’s stacked Jenga game pieces. To complete his creation, Andy picked everyone’s favourite floppy-eared dachshund with a stretching coil body – Slinky Dog – and dropped it onto the coaster track. Slinky Dog Dash is inspired by the delightful pooch spinoff of Slinky, the classic 1940s American toy. Riders of all ages delight as Slinky Dog bends and twists his coils around curves, over hills and down drops in the Slinky-est coaster ever. In each 18-passenger coaster train, riders zip around and above Toy Story Land, catching great vistas of all the new land has to offer. In a first for a Disney coaster, Slinky Dog Dash features a second launch at its midpoint as riders experience cool sound effects and spinning lights, darting through a series of rings on their way to the attraction’s finale featuring Wheezy, the squeaky penguin from the Toy Story films. 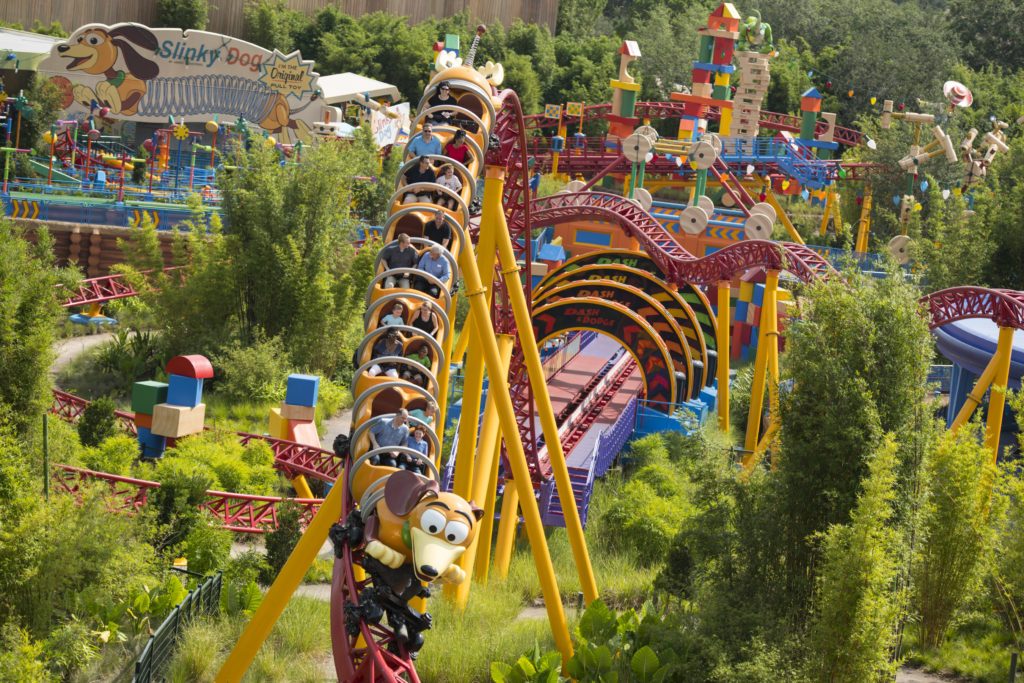 Brace yourself for out-of-this-world thrills, because the Aliens have powered up their flying saucers! Alien Swirling Saucers immerses guests in the playful world of Andy’s imagination. This galactic space toy is designed as a playset Andy won at the Pizza Planet restaurant. The adorable little green Aliens from Pixar Animation Studios’ Toy Story swirl about in toy rocket ships with guests in tow, while “The Claw” hangs overhead. Two sets of 11 saucer/rocket-ship pairings spin guests through a multi-colored galaxy to a raucous, energetic musical beat. 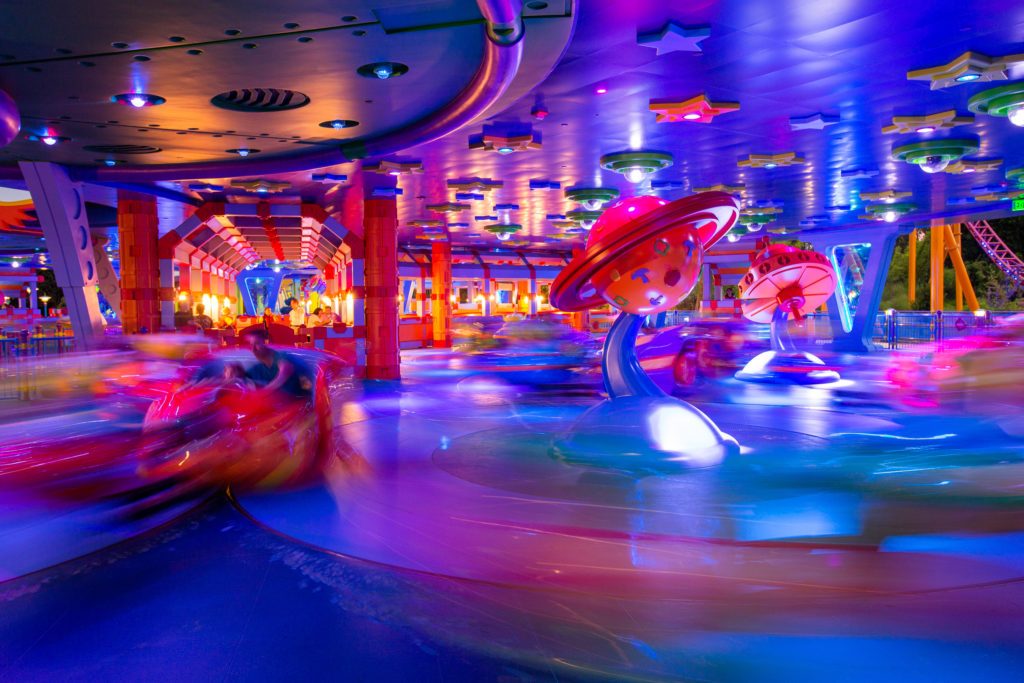 While Andy’s away, the toys will play! Toy Story Mania! – one of the most popular attractions at Disney’s Hollywood Studios – receives a colorful all-new entrance. Evoking the fun in store, the entrance is actually the box Andy’s Toy Story Mania! game came in. Recently updated with a third track, the attraction allows even more guests to experience the carnival playset action, using virtual objects from baseballs to cream pies to hit targets in a variety of whimsical, fast-paced scenarios. To the highest scorer go the bragging rights!

When it’s time for on-the-go refreshments, Woody’s Lunch Box serves tasty meals and old-fashioned soda floats from a walk-up window in a setting surrounded by Andy’s favorite toys and a giant vintage thermos. Order a grilled three-cheese sandwich, grab a seat under festooned lighting at a Tinkertoy table and take in the scene. You’ll even spot Sarge, the Green Army Men leader, in a tower on the lookout for Andy. Woody’s Lunch Box features Mini Babybel cheese – the Official Snack Cheese of Walt Disney World Resort. Babybel’s famous cheese wheel also provides inspiration for fun chairs and tables nearby. 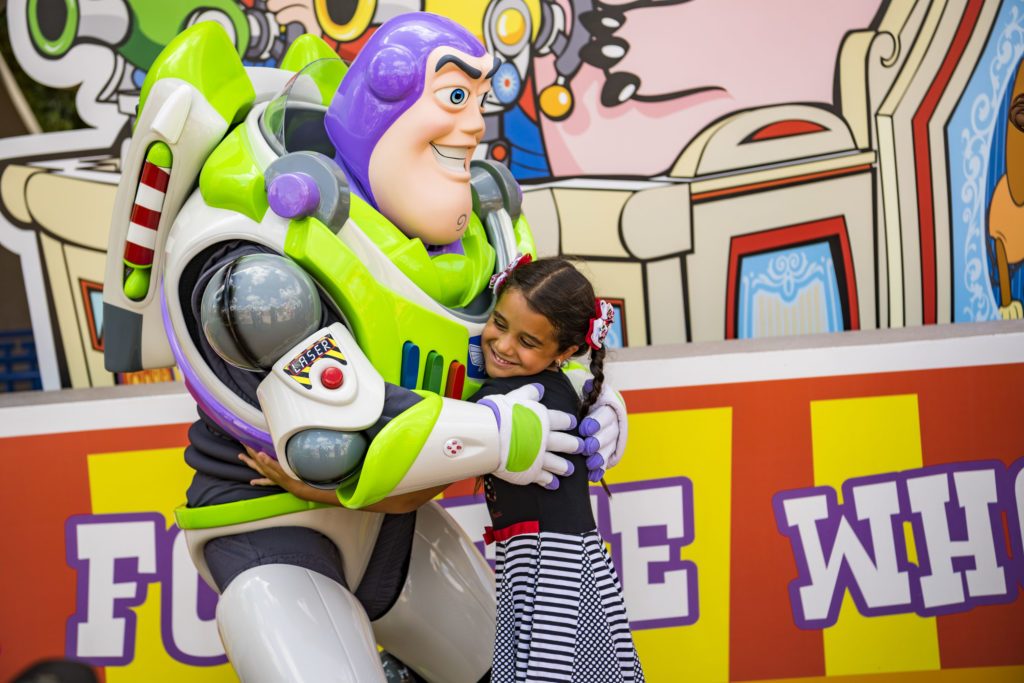 Two merchandise locations – a toy camper and toy dump truck – offer shoppers logo merchandise, must-have collectibles and unique gifts sure to become long-lasting memories of their time in Toy Story Land. Special items sure to become guest favourites are small scale replica toys of the attraction vehicles, a Slinky Dog that can be a tabletop toy or double as a fashionable accessory, and colourful headbands sprouting an Alien or Slinky Dog himself.

To add to the fun, Woody, Jessie, Buzz and their pals appear throughout the land. The Green Army Drum Corps creates a playfully percussive rhythm, and Sarge and the Green Army Patrol march through the land, playing games with guests in a fun and interactive boot camp – ten-hut!

Toy Story Land is part of a multi-year reimagining of Disney’s Hollywood Studios and the largest expansion in the theme park’s history. Next year will see the premiere of the all-new, 14-acre Star Wars: Galaxy’s Edge. This new land will allow guests to visit Black Spire Outpost, a remote trading port on the edge of wild space, where Star Wars characters and their stories come to life – and where guests will find themselves in the middle of the action. Also coming in 2019 is Mickey & Minnie’s Runaway Railway. The first Mickey-themed ride-through attraction in Disney Parks history will feature new technology, dazzling visual effects and mind-boggling transformations that put guests in the wacky and unpredictable world of a Mickey Mouse cartoon short. Disney’s Hollywood Studios is transforming into a place where everyone can play together and experience their own adventures in the immersive worlds of their cinematic imagination.