One App, Two Languages. All wrapped up in a Bilingual Storybook 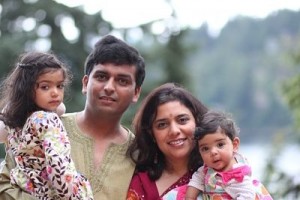 Raising children in a bilingual community such as Canada, US, or the UK or anywhere else can be a challenge, especially when trying to teach your child the languages.  As a mom of two young daughters Survi Gopal, living in California, she wanted her children to speak her native language: Hindi. Her husband however, spoke Gujarati. With both sets of grandparents and parents speaking different languages it was important for her to find a way for her daughters to speak and understand both languages.

She developed an app that would teach her children Hindi by using the traditional panchatantra stories. We had a chance to ask her how the bilingual storybook app Monkey And Crocodile works and what makes it different than anything else available.

What inspired you to develop this app? 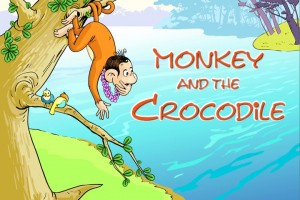 My 3-year-old loves the panchatantra stories. As we try to raise our kids bilingually we always read books written in English to her in Hindi. Also most of the panchatantra books that I would read to them had animal as characters, which my child loves however it also included some fight and violence between animals, which I would like to skip.

So our journey started  there. We wanted to bring the knowledge and wisdom of these beautiful classics to younger audiences like our daughters. This is how we launched our first bilingual storybook app Monkey And Crocodile – by Niyaa available  both on iPhone and iPad, includes English and Hindi narration. We have recently launched our second storybook app too “Little Blue Jackal (for iPad) – by Niyaa too.

Both these apps are based on the panchatantra  stories. 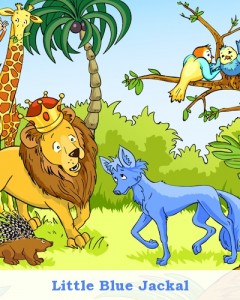 What age group is it for?

How does it work?
Both the storybook apps read like a book with multiple modes. You can  either let the app narrate the story to you or choose the read it myself mode to read it on your own.  It also includes Sleep Mode where you can choose to only listen to the story without any visuals ideal for bedtime. App also includes a fun Animal Facts Game where kids can learn about the animals in  the story. Also both apps include a Parent Child Activity.  Monkey and Crocodile also includes narration in Hindi soon to be featured in Little  Blue Jackal.

These stories are based on the timeless Panchatantra classics a collection of Indian folktales first written in 3rd century BC.

What level of Hindi are kids learning in this app?

We are hoping this becomes a medium to have kids learn to speak and communicate in Hindi.

How can parents use this app to teach children? what role do the morals play in the story?

Both apps include a parent child activity that helps with understanding the story. Also includes Animal Fun Facts page where the kids can learn about the animals in the app. The moral is key to both these storybook apps and the app is an excellent way to teach these sound morals to kids in such  a fun and engaging way.

Is the app only for English/Hindi?

Currently Monkey and Crocodile is in English and Hindi. We will include other languages based on what our users would like to see. Would love to hear from users the languages they prefer to hear the app in.