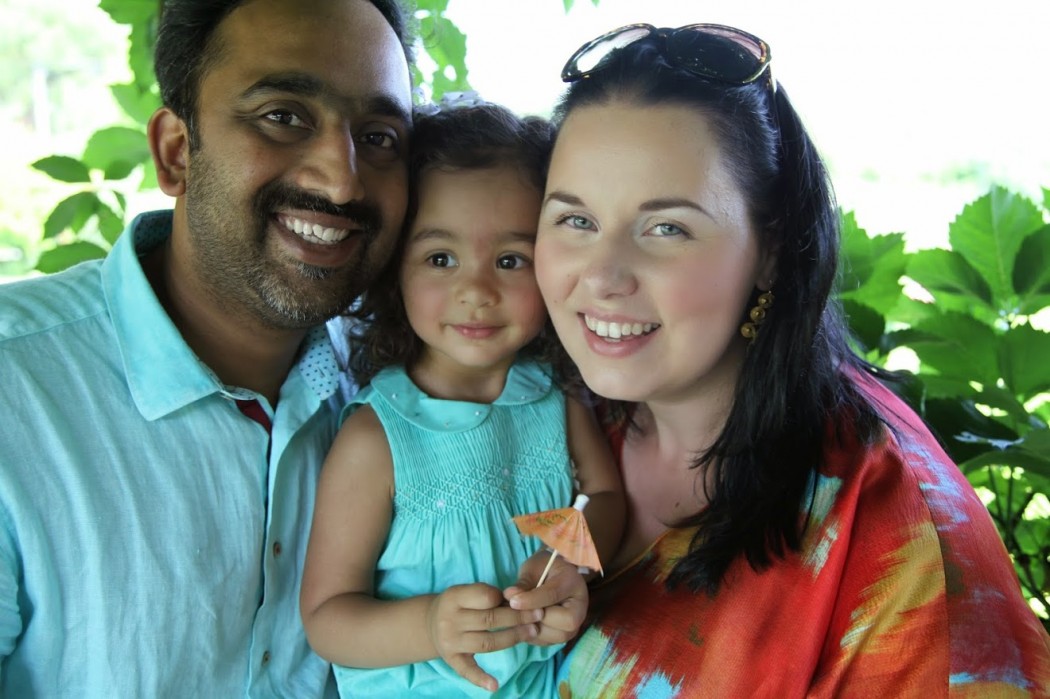 This past month will mark 49 years since anti-miscegenation laws were struck down in the United States and interracial marriages were deemed legal. Nowadays, there are more mixed marriages than ever before, with people marrying freely across cultures, continents and races in the name of love. Especially in Canada, cross-cultural relationships have one of the largest growth rates. Mixed relationships are eagerly coming out of the woodwork and becoming a societal norm.

However, that still doesn’t stop the weird stares and strange questions that we interracial couples sometimes get, because – let’s face it – we are technically a minority in the grand scheme of things. Time and time again, we come across people who have never met a real intercultural couple, or in some cases, never even seen one.

Usually the stares and questions come from a curious place and it is our job as intercultural couples to educate such people and open their minds to help make our society more tolerant to our type of relationships.

A lot of the misconceptions we face surprise us because we are just an average couple…that happens to hail from two very diverse cultures.

It is important to remember that one size does not fit all – like any relationship, intercultural relationships are all different. 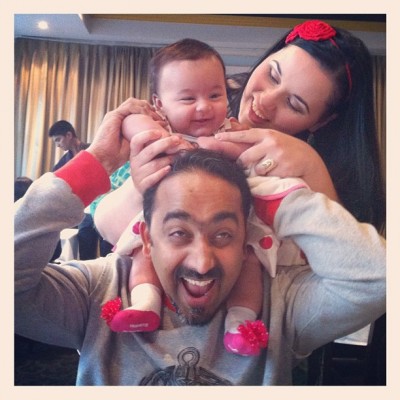 Here are some common misconceptions that we have faced as an intercultural couple:

We come across this stereotype a lot. People are dumbfounded when they realize how long we have been together, which oftentimes is much longer than others who are our age. The individual you’re married to is more important than their country of origin or racial background. Relationship compatibility has nothing to do with culture. You can be from two very different cultures and have so much in common and similar personal values.

2. That intercultural relationships are harder than normal. 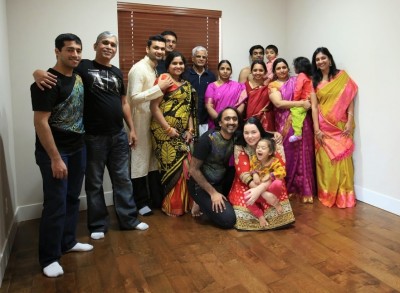 Every relationship is hard work – you have to nourish it with time, patience, tender love and everlasting commitment. Intercultural relationships are no different. Just because people are two different skin colours does not mean that the relationship must be “harder” than a same-culture relationship.

3. That you’ll have culture clashes every single day.

Culture does play a big part of who we are, our mannerisms, and our beliefs, but it is not a defining quality. Like any couple, we tend to have more personality clashes rather than cultural clashes. We are just an average family balancing work, kids, family, and life in general. Culture does not necessarily come up on a day-to-day basis.

4. That you only married your spouse for a green card or to immigrate to a different country.

This is one of the misconceptions that I despise the most because it implies that mixed marriages are not as valid as others, or that it is based on an ulterior motive. In reality, intercultural relationships are based on love, just like any other relationship. Any married couple would want to live with their spouse and not be long-distance, which is why one partner eventually has to immigrate to the other partner’s country. Because of this, people doubt our love for each other, no matter that many of us have to uproot our lives just to be with our partner. Married couples should not have to live separately due to strict immigration laws, and families should not be divided by borders. 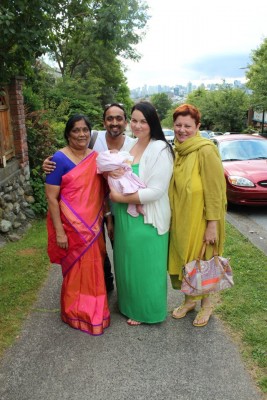 The “marrying for a green card” belief is also only assumed if one of the spouses is from a Western country like USA, Canada, Australia, England, for example. People always assume my Indian-born spouse married me to gain Canadian residency, but nobody ever assumes that I married my spouse to get an OCI (Overseas Citizen of India card)!

5. That your respective families will never accept your spouse.

This is unfortunately true of some couples who come from deeply conservative families, but it is not a reality for all. Many cross-cultural couples have families that wholeheartedly support their union, and most importantly do not treat them differently than the rest of the family. This is certainly true in our case, since both of our families (Canadian / Tamil) get along famously. My in-law’s are like another set of parents, and my mom affectionately calls my husband “her son“.

6. That you have to give up your own culture when you marry into another culture.

Marriage is about two different people coming together, and while they may share the same common goals and outlook, at the end of the day they are still two separate individuals. Many individuals who are in cross-cultural unions have no interest in adopting their spouse’s culture into their own life, and that’s totally their prerogative. You don’t have to adopt your spouse’s culture in order to love your spouse.

You can appreciate your spouse’s culture without integrating it into your own lifestyle.

7…OR that you can’t adapt to your spouse’s culture.

My husband’s family’s main concern of me was that I wouldn’t be able to adjust to Indian culture, which turned out to be completely false. The minute I landed in India, I felt at home. I have embraced my husband’s culture wholeheartedly and organically in almost every aspect of my life. Just because someone’s from a completely different country doesn’t mean they can’t or won’t adapt to a new culture.

8. That we hate our own culture/race. 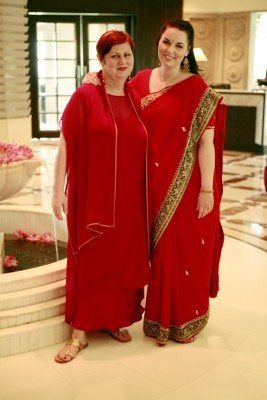 Just because I fell in love with an Indian and have embraced Indian culture, doesn’t mean I hate Canadians or Canada. It just turned out that I fell in love with a man who is from a very different culture than I am, and we were compatible, inseparable, and we decided to make a life together. Like any couple, it was more about destiny and timing, and the way that relationships just “click“. I am not less of a Canadian for marrying him, and he is not less of an Indian for marrying me.

9. That we have a big fetish for our spouse’s race.

For all my social media profile pictures, I always choose a picture of my husband and I together. Unfortunately this somehow flags me for a lot of random requests and messages from Indian men who assume that just because I married an Indian man, makes me open to all Indian men. In reality, I am just an average married woman and my husband happens to be Indian. I have no interest in any other man, period.

Another assumption that I usually get from friends is that people think that I have “a thing” for Indian men. It’s a weird sexualised, exoticised assumption. Often, people expect that I have dated a bevy of Indian men, as if I have some sort of fetish for men who share his national origin. I only have “a thing” for one Indian man, and that “thing” is called marriage.

I can definitely be rebellious. I have tattoos, I am an artist, I don’t like people telling me what to do. But I did not choose my life partner as a way of acting out my rebelliousness. If the societal norm is marrying someone of your own race, that’s society’s problem – not mine. We have rebelled against it out of coincidence, but we did not get married for the sake of rebelling. We fell in love and that love just happens to be seen by many as different and unusual. We can’t help it…it just is!

11. That you’ll fight over religion; or you’ll have to convert to your spouse’s religion.

My husband is Hindu and I am Catholic, and in 10 years we have yet to have a single fight about religion. Conversion has never come up, nor was it ever necessary. For many people, this may be hard to believe. We respect each other’s religions and appreciate both in their own way. It’s a pretty simple and stress-free way to live. Everyone should try it! 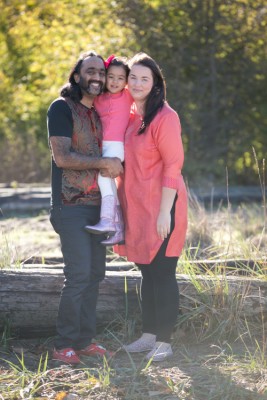 I came across this one recently as I was harassed by white male twitter trolls who didn’t like my interracial relationship. One of them said that I “married down“, as if marrying an Indian was beneath me. A long time ago, at the beginning of our relationship, my husband also faced this from his Indian boss. His boss encouraged him to find a traditional Indian girl and that by being in a relationship with me, I was “polluting” his family with sin. What these people fail to realize is that no culture is “above” or “beneath“.

13. That intercultural couples can ONLY meet online.

At this day in age, so many people meet their spouses online through social media and popular dating sites. The internet gives people from different backgrounds a way to connect, so obviously there will be more cross-cultural relationships produced from it. However, not ALL intercultural couples meet online. A lot of us meet the old-fashioned way – through friends, work, university, or just running into each other randomly on the road.  We are surrounded by diversity and multiculturalism in our daily life, it’s just that most people don’t see someone from another race/culture as an option to be a potential mate.

14. That all intercultural relationships will end in divorce. 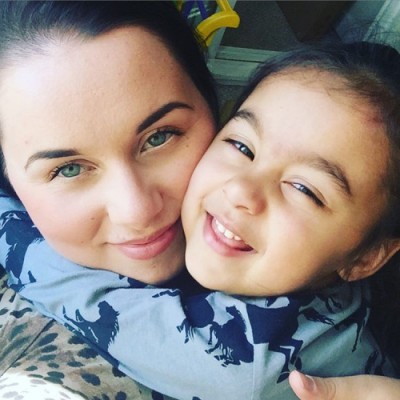 People always say, “never say never” but I for one, can confidently say that I will never get divorced. Never, ever, ever. I married my soulmate and this is it for me. There is no one better suited to me than my husband. The concept of divorce is not in my personal vocabulary and has never been on the table for me. I am not more likely to get divorced just because I’m in an intercultural union.

15. That biracial children have no identity; or that they are confused about their identity.

I would argue that biracial children have very strong identities which are just misunderstood by others. They are not “confused“, they are multicultural. Being from two or more diverse cultures makes them automatically multicultural and more likely to mix with all cultures. People should not ask biracial children to pick between one or the other. Our daughter is very aware of her rich cultural background and is very proud of it. She knows that daddy is Indian, and that mommy is Canadian. She has a very strong identity and she celebrates being both equally.