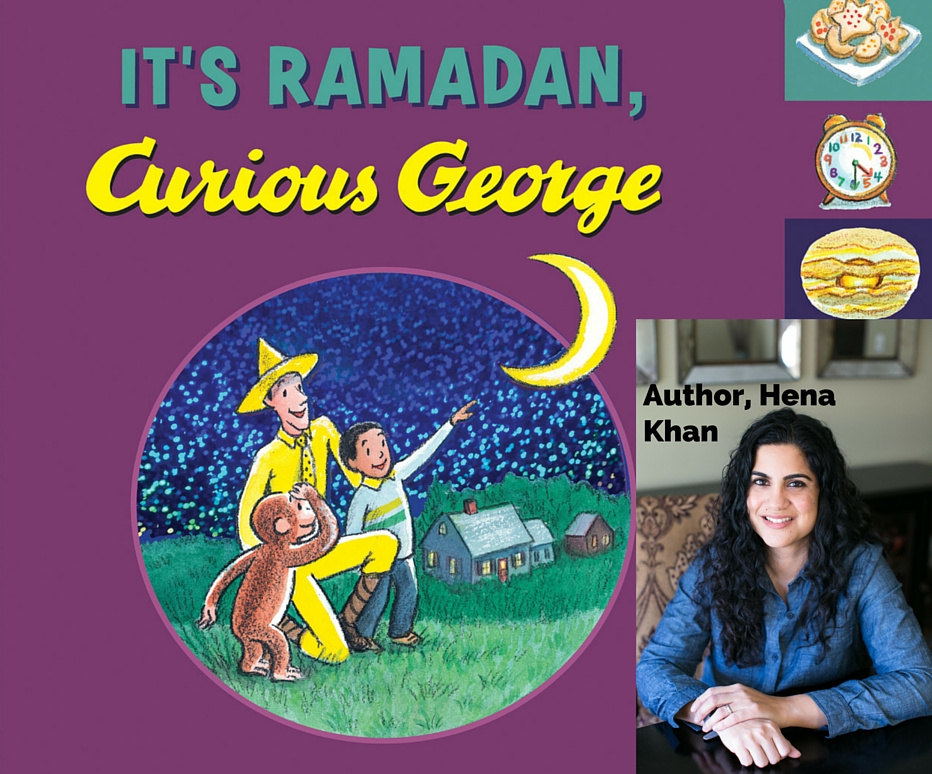 He’s the little monkey we grew up giggling over, as our moms read us his stories before tucking us into bed. Generations before us loved his adventures through parks, homes, journeys and fire stations. His name was Curious George. But what if this beloved animal could help kids and parents be empowered about culture? 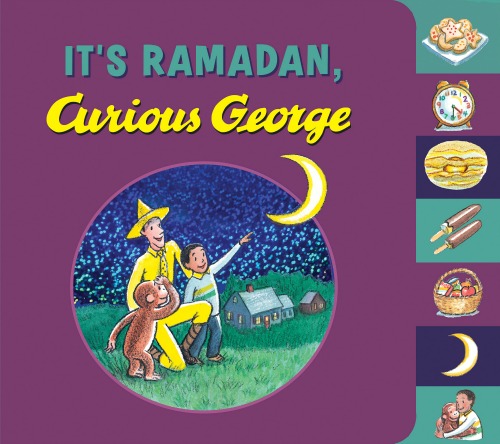 Muslim Author and mother of two, Hena Khan, took this question to heart and is helping Curious George teach kids about Ramadan in her latest book, It’s Ramadan, Curious George, which will be published by Houghton Mifflin Harcourt.  This book is part of a growing trend in children’s publishing to reach a more diverse audience. 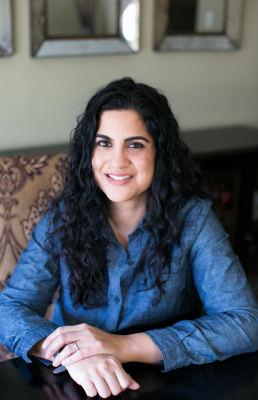 Khan, who grew up loving Curious George,  says the idea of telling this particular story came directly from her publisher.

“I was excited to hear that they were interested in having Curious George celebrate Ramadan and that they asked me to write the book.”

She says that much of the negative discourse we’ve been seeing around perceptions of Muslims stem from a lack of information or even misinformation.

Studies show that more than half of Americans say that they haven’t ever met a Muslim. This gives people a chance to get to know a Muslim family through its interaction with a beloved icon.

“And I hope that it will in some small way foster tolerance and inclusion of American Muslims and drive home the point that we are as American as anyone else.”

Diversity in books are picking up steam as of late and more and more parents are looking for diverse books to complement their growing libraries at home and in the classroom.  Hena, who has also written two other picture books introducing Muslims and Islam to American children, is hoping to close this gap.

“I did see a gap in the literature available for kids that focused on Muslim culture and traditions that were written in an accessible and appealing way for non-Muslim and Muslim children’s alike, especially after I became a mother,” says Khan. “That is what motivated me to write my first Muslim themed picture book, Night of the Moon (Chronicle Books, 2008), which focuses on Ramadan and Eid through the eyes of a young girl. I followed that up with Golden Domes and Silver Lanterns (Chronicle Books, 2012), which introduces concepts that are important to Muslims through the use of the color. Since Night of the Moon, there have been other nicely done books that focus on Muslims published, but I still think there’s room for more!”
She says in her latest book, Curious George discovers the mean of Ramadan through some very basic principles she weaves into the story.
“It starts with George helping his friend Kareem and his family prepare for Ramadan by making special treats. The next day Kareem is keeping his first fast, and George helps to keep him busy and his mind off of food. He and the Man with the Yellow Hat break fast with Kareem and other friends. George visits the mosque to help make food baskets for charity. And he watches for the moon’s first crescent and the end of the month and then finally celebrates Eid with Kareem.” 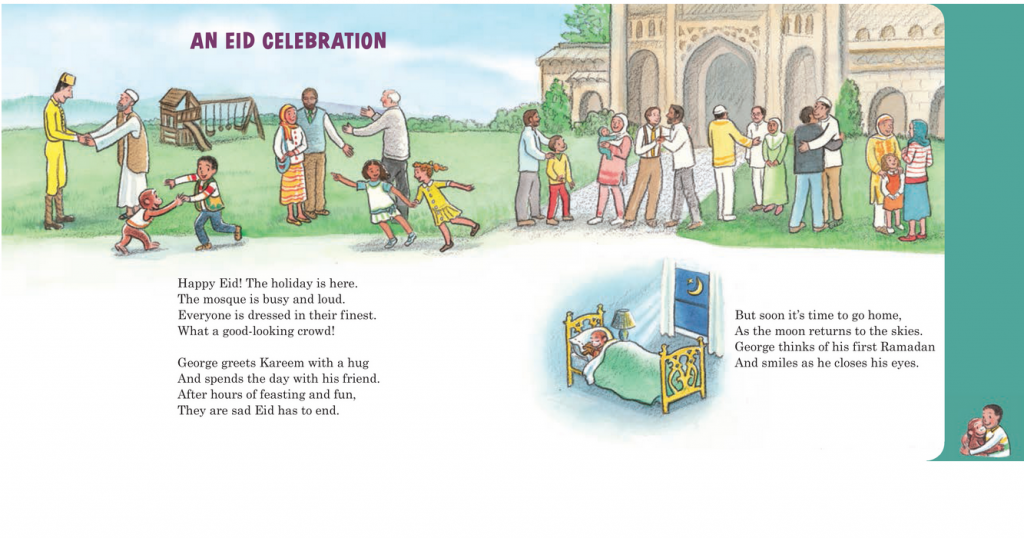 Khan adds there were some important considerations she had in mind when writing a book about Ramadan when it came to both the story and illustrations,  especially for young readers.

“I wanted to the book to focus on the aspects of Ramadan that are fun from the perspective of a child, like gifts, and treats, and play, while touching on the important themes like fasting, iftaar, prayer, charity, sighting the moon, and Eid prayer,” said Khan.  “I also wanted the illustrations to represent Muslims from all ethnic backgrounds and races, and think they were very nicely done.” 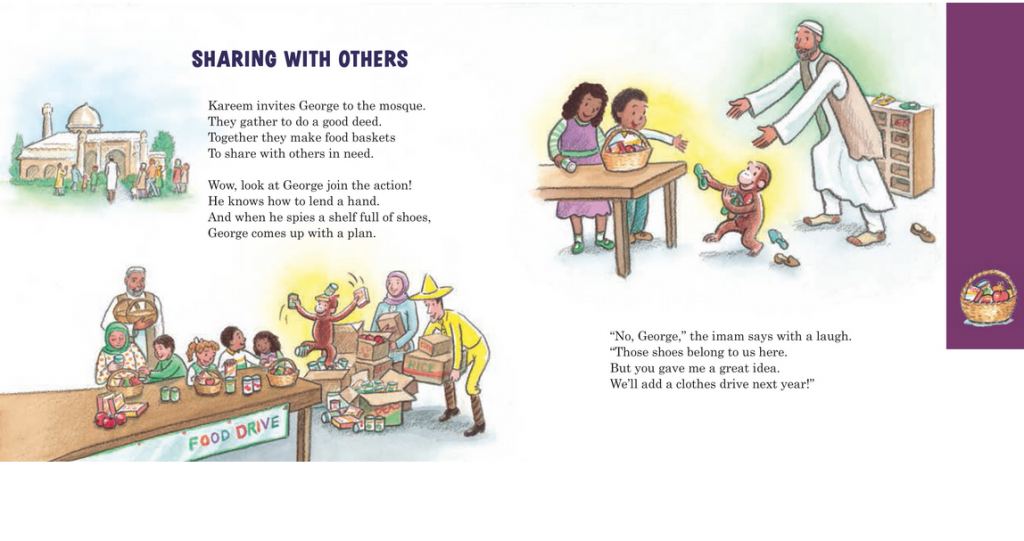 Khan says the simplicity of the book makes it easily accessible to anyone and people of all ages.

“I intended the book to be read by everyone, little kids and older kids, parents, educators, Muslims, and people from all backgrounds and faiths interested in learning more about Muslims,” says Khan.  “Parents can help by explaining the traditions, like what fasting is and how it works, what a mosque or an Imam is, or what the Eid holiday is about. The book introduces these concepts through the story but doesn’t spend time explaining them.”
Khan, a proud parent of two sons with whom she often reads various diverse books with,  has written all of her Muslim-themed books with a school library audience in mind.  Her first two books can be found in libraries across the country, and Golden Domes and Silver Lanterns was an American Library Association Notable Book and is available through Scholastic school book fairs. 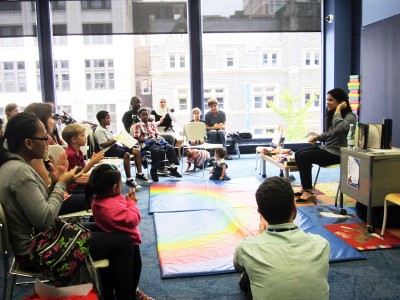 “I think it’s critical to include diverse books in school libraries, and not just in those with diverse populations. It’s just as important to give kids who might not have Muslim friends “windows” to learn about them through books. And as I mentioned earlier, it’s also important of course for Muslim children to see themselves mirrored in the literature.”
At at time when race and ignorance about religious values is creating volatility, books like these, may inspire change at the youngest level.

“A book like this is important for many reasons. It gives Muslim children a chance to identify with a Curious George story that directly relates to them,” said Khan. “It’s a great opportunity for them to see themselves in the literature and to feel included. The book also serves to educate people about Muslims and our traditions and culture in an entertaining way.”

It reinforces the idea that Muslims are part of the fabric of American society, and that we share the same values as all Americans—family, community, and charity.

With such a polarized nation as the US when it comes to religious values and race, is she worried about a backlash against this book?

“No, I have only heard positive reactions to the book. The response has been overwhelming excitement on the part of the American Muslim community, enthusiasm and support from the wider community, and great coverage. I’m hoping there won’t be any backlash, and I hope that if there is any that it won’t get much attention.”
Reach out to Hena at:
www.henakhan.com

You can order Hena’s book at : amazon.ca