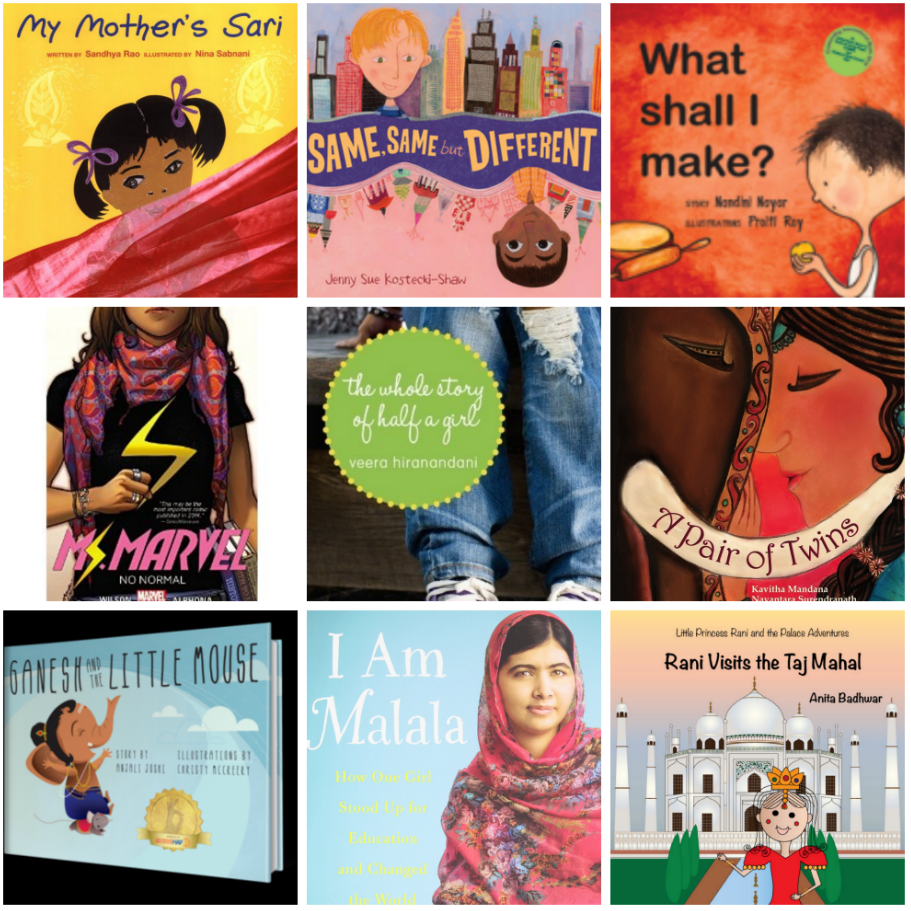 From South Asian language to culture and history to the stories of growing up with a South Asian connection, this list offers some of our favourite reads for ages 2 and up! 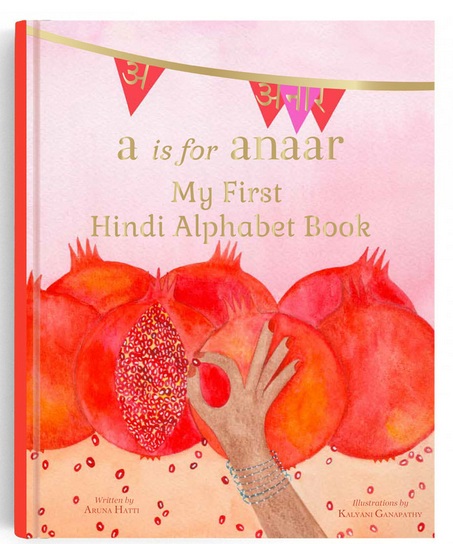 My First Hindi Alphabet Book. Features fun and catchy rhyming text and highlighted with transliterated Hindi text, learning Hindi has never been more fun! Richly illustrated by visual storyteller Kalyani Ganapathy, your kids will fall in love with Vidya’s world! Vidya loves to eat annar, plays tabla, dances with dandiya and even has a pet oonT!

2.Have Fun With Panjabi, by Kiran Lyall 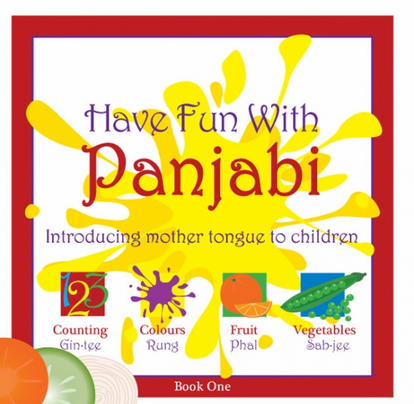 A wonderful book that shares words such days of the week, numbers, names of food and more so little ones can learn the basics of Punjabi. Here’s more info in our video here. 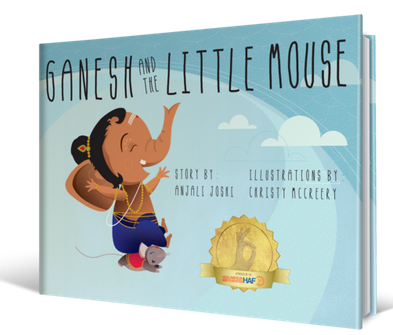 The kingdom’s annual around-the-world race is here! Will Ganesh and Little Mouse stand a chance against the other fierce, powerful, and strong competitors? This heartwarming tale of true friendship and love is a modern take on the Hindu classic. Approved by the Hindu American Foundation.

4.In Andal’s House (Tales of the World), By Gloria Whelan 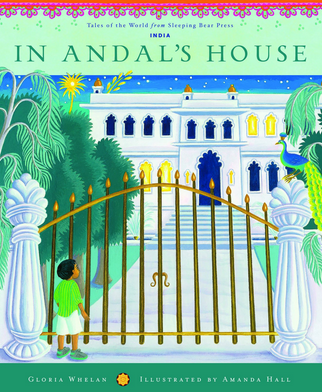 As a young boy in Gujarat, India, Kumar sometimes feels like he lives in two worlds. First there is the old world where people and their choices are determined by prejudice and bigotry. But then there is the second, modern world: in this world Kumar can be friends with whomever he chooses and his future looks bright. As part of the annual Diwali celebration, Kumar is invited to the house of his classmate Andal to watch fireworks.

Andal is from a high-caste Brahmin family so Kumar is especially pleased to be included. But there in Andal’s house, Kumar’s two worlds collide in a very unpleasant way. Instead of being welcomed as a guest, Kumar is sent away, forbidden to join the festivities. Angry and hurt, Kumar is left questioning his place in Indian society. Where does he fit in? To which world does he really belong?

5.The Not-So-Star-Spangled Life of Sunita Sen (Originally published as: The Sunita Experiment), by Mitali Perkins 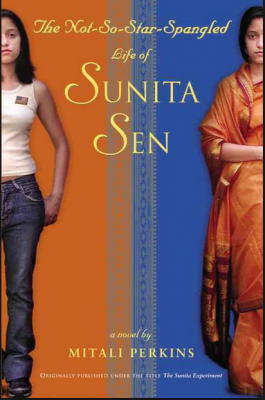 In this engaging story about cultural discovery, thirteen-year-old Sunita finds herself resenting her Indian heritage when her grandparents come for a visit from India to California. She’s embarrassed by the differences she feels between herself and her friends, but she’s in for some surprises as she gets to know her grandparents — and herself! Includes a reader’s guide. 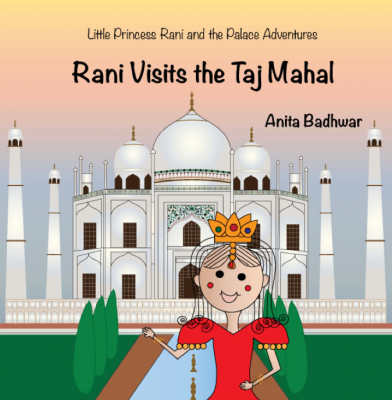 This series is one we love. We’ve featured it on masalamommas in our editorial a series that helps kids learn about India and its festivals in a fun fun way and we’ve also had her books featured in our webseries. In this book, Rani is in the city of Agra visiting the Taj Mahal with her family and pet parrot, Hari. Hari is so excited to explore the beautiful Taj Mahal that he wanders away from Rani and finds himself lost! Find out how Hari finds his way back to Rani in this new adventure. 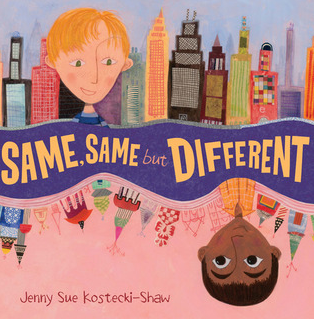 Pen Pals Elliot and Kailash discover that even though they live in different countries—America and India—they both love to climb trees, own pets, and ride school buses (Grade 5 & under). Previous winner of SOUTH ASIA BOOK AWARD for Children’s and Young Adult Literature.

8. A Pair of Twins by Kavitha Mandana; illustrated by Nayantara Surendranath (Karadi Tales, 2014). 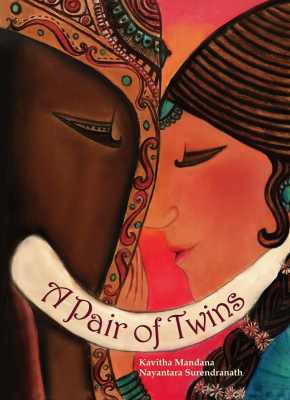 A vibrantly illustrated and empowering tale of an Indian girl and her “twin,” an elephant born the same day, who bravely break down cultural and gender barriers while taking on roles historically restricted to males. (Grades K-3) Highly Recommended read by South Asia Kids Book Award (2015). 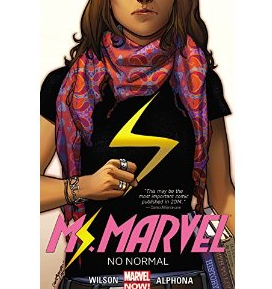 Kamala Khan is an ordinary girl from Jersey City — until she’s suddenly empowered with extraordinary gifts. But who truly is the new Ms. Marvel? Teenager? Muslim? Inhuman? Find out as she takes the Marvel Universe by storm! When Kamala discovers the dangers of her newfound powers, she unlocks a secret behind them, as well. Is Kamala ready to wield these immense new gifts? Or will the weight of the legacy before her be too much to bear? Kamala has no idea, either. But she’s comin’ for you, Jersey! Designated a ‘highly recommended’ book by South Asia Kids Book Award. 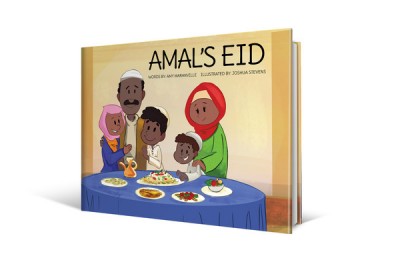 Another Bharat Babies winner in helping young ones learn more about their culture and traditions.

Meet Amal. Amal is in the third grade. He loves playing outside, hanging out with his little brother Youssef (sometimes!), and eating Bengali sweets. Today, Amal is celebrating Eid al-Fitr with his family, and he wants you to join in the celebration. Learn about Amal’s special family traditions as they celebrate the end of Ramadan.

11. I Am Malala, Young Reader’s Edition 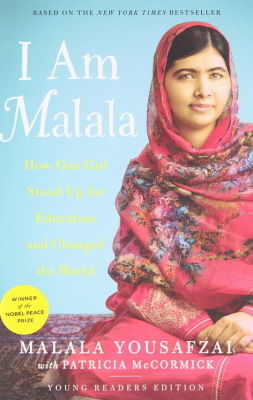 We love this book and have had great feedback from our young readers on this book. Malala Yousafzai was only ten years old when the Taliban took control of her region. They said music was a crime. They said women weren’t allowed to go to the market. They said girls couldn’t go to school. Raised in a once-peaceful area of Pakistan transformed by terrorism, Malala was taught to stand up for what she believes. So she fought for her right to be educated. And on October 9, 2012, she nearly lost her life for the cause: She was shot point-blank while riding the bus on her way home from school. No one expected her to survive. Now Malala is an international symbol of peaceful protest and the youngest ever Nobel Peace Prize winner. In this Young Readers Edition of her bestselling memoir, which has been reimagined specifically for a younger audience and includes exclusive photos and material, we hear firsthand the remarkable story of a girl who knew from a young age that she wanted to change the world — and did. Malala’s powerful story will open your eyes to another world and will make you believe in hope, truth, miracles and the possibility that one person — one young person — can inspire change in her community and beyond.

12. The Whole Story of Half a Girl by Veera Hiranandani. 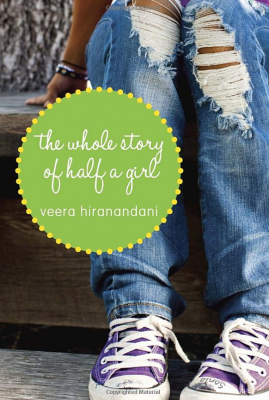 We featured this book in a previous masalamommas review all about the bicultural experience. When Sonia’s father loses his job, she must move from her small, supportive private school to a public middle school.  The new school, her father’s diagnosis of clinical depression, and her half- Jewish and half- Indian heritage leave Sonia feeling more confused about herself, her friends, and her family.  Grades 5-8). This book also won a 2013 South Asia Book Award for Children’s and YA Literature.

13. What Shall I Make? by Nandini Nayar 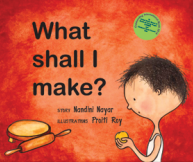 Roll it, pat it, poke in eyes, stick on nose and ears — and a ball of chapati dough can turn into almost anything! The endearing illustrations follow the quirks of a child’s imagination. The pictures in this book and ‘dough art’ will make you and your little one have hours of fun in the kitchen! 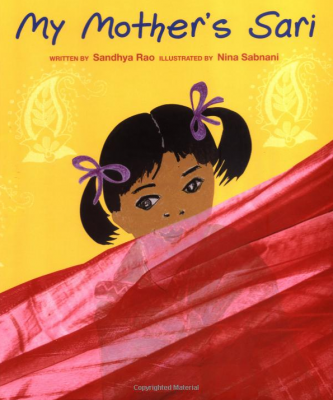 The sari Mother wears everyday is sometimes a train, sometimes a river, or a swing, or a hiding place . . . Children have a way of seeing things differently! The pictures too break away from conventional depictions of both sari and children, combining photographs and acrylic in dramatic, original ways. The spare text weaves and winds between this visual interplay of children, colours and textures, to create the mood-filled world of  My Mother’s Sari.  The US edition of the book has been selected for Outstanding International Books for 2007, a cooperative project of the United States Board on Books for Young People (USBBY) and the Children’s Book Council, USA.

15. Swimming Through the Clouds

We are a big fan of Rajdeep’s books and she’s also had her books reviewed on our site before.

Senior year kicks off when a Post-it note sparks a sticky romance between two unlikely friends. Transfer student Talia Vanderbilt has one goal at her new school: to blend in with the walls. Hoops and homework occupy Lagan Desai until something moves to the top of his list: befriend the new girl.  One Post-it note at a time, Lagan moves past Talia’s caution-taped heart, revealing a world where hope seems to lie around the corner…she never turns. From Award-winning author Rajdeep Paulus comes a story that reminds us that life is battle we don’t fight alone.