What is ‘The Bad Mother?’ A Film Review

The Bad Mother First Trailer from David Fernandes on Vimeo.

Motherhood can drive a woman mad. What other line of work could be so cruel to the mind, body and soul? Every mom has wracked her brain wondering, “Am I doing enough?” Every mom has fallen into the comparison trap where she pits herself against the high-functioning, perfect-on-the-outside woman raising perfect kids. We all know this is not so, yet our minds take us there. We yearn for the days before kids – carefree, in the workforce, having adult conversations and wearing our skinny clothes and heels. Those yesteryear days when life was easier, kinder, and we had more control. At least, we think that now looking back.

Your life changes when you have kids, no doubt, but it takes far longer to accept and adjust to this change than it would if you were moving to a new city, getting a new job or even getting married. Some mom’s lose a part of their identity, they give up a lot of themselves for their kids because they feel like that’s what society wants them to do, or, that’s what society is forcing them to do (if you can’t afford childcare). I recently had the pleasure of screening a film that touched me and my own personal struggles with parenting and losing the image of myself as a career woman. The independent film, “The Bad Mother” premieres at the Hamilton Film Festival on November 7, 2015 at 7:30pm. I think so many of us will relate to it.

I was lucky enough to speak with Sarah Kapoor, writer and star of “The Bad Mother.” The film is a dramatic comedy about a mom (Tara Dubay played by Sarah Kapoor herself) who accidentaly opens up a polarizing discussion over social media about being a stay -at- home mom versus a working mom all while experiencing the emotions involved with the madness of motherhood and the descent of her own career. 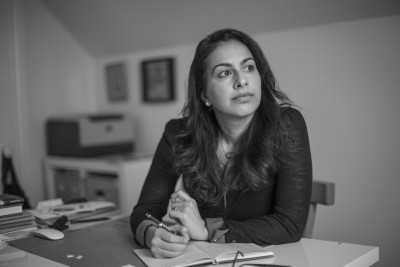 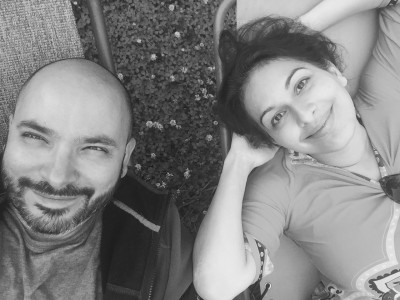 Sarah and her business partner David Fernandes founded Pollinator Films Inc. and are a directing and producing team. This is their first feature film. Sarah and David self started the film using their own finances and supplemented with a Kickstarter campaign. They are also the first Canadian film ever to try equity crowd funding via the Seed Ups Canada platform – whereby investors own a stake in the film.   The film also stars David Avocado Wolfe, the famous health and lifestyle guru with a strong ‘mom’ following, who touts that we should all “Have the Best Day Ever!” It also has a cameo by Punjabi Canadian comedian JusReign. Sarah’s husband, mother and her children also star in the film, “this film is really, truly the product of our blood, sweat, and tears, “ says Sarah.

Coming from a high-powered background in journalism, Sarah chose to have her own business while raising her two kids. When I asked her if the film paralleled her own experiences as a stay-at-home and working mom she said, “None of it is true, and all of it is true.” This made me laugh because while it is a work of fiction, the topics she touches on in the film are very real for most parents – a husband working late and travelling, a mother’s worry about her children, a grandmother’s or a best friend’s good or bad advice – any parent could experience this daily. Sarah says the theme of the film is simple:

Motherhood is undervalued economically for stay-at-home moms and underestimated in complexity for working moms. As a society why are we ok with there being a penalty for being a parent?

While the themes of the film can hit a nerve with most moms out there, Sarah and David have been able to portray this struggle in a very funny yet tender way. I did literally laugh out loud and then felt myself getting teary at times.

There are subtleties dotted throughout the film that left me feeling like they had been peering into my own home – like how one simple compliment from a stranger can send a mom over the moon flying high with confidence for the rest of her day, or how you don’t have time to take care of your personal appearances so you hang your hat on something like a ‘sock bun’ that you deem to be esthetically perfect or how about when your mom comes over, she is blunt and to the point – for better or for worse.

Enter the “Nani” character (maternal Grandmother) played by Sarah’s real life mom. No acting experience necessary for this role, because she just needed to be herself. Sarah tells me the Nani character, “is a patriarch in a matriarch’s body. She’s always pushing Tara to be her best.” The main character Tara Dubay struggles with the obstacles to going back to work and leaving her kids in the hands of others – but the Nani character recognizes that, “having an income is an expression of protecting your kids because life can be uncertain, “ says Kapoor.

So here we come back to the theme – society’s dictation of work-life balance for parents. This film ignites a discussion about career success and work life balance for parents – a trophic cascade, where if you change one thing, then other things will change too.   “The Bad Mother” hits the nail on the head without judging any parent. I think this debate is important, undervalued and like I mentioned before, so many of us will relate. I urge you to watch it!

You can watch the film at the Hamilton Film Festival on Saturday, November 7th 2015 at 7:30pm – www.hamiltonfilmfestival.com scroll down to November 7th and purchase tickets from the buy now link.