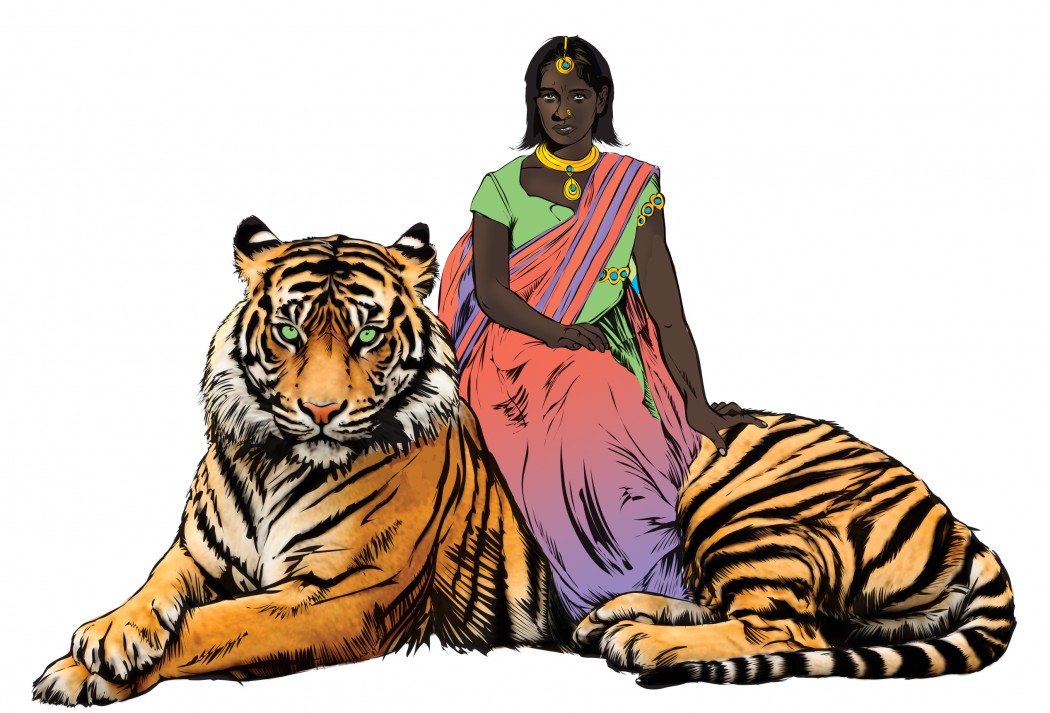 A new comic book with a female rape survivor as its “super hero” launches to shed light on the problem of sexual violence in India.

On December 16, 2012 in Munirka, a neighbourhood in South Delhi, a 23-year-old female physiotherapy intern,[2] was beaten and gang raped in a private bus in which she was travelling with a male friend. There were six others in the bus, including the driver, all of whom raped the woman and beat her friend. The woman died from her injuries thirteen days later while undergoing emergency treatment in Singapore.[3][4]

It was this horrific crime that set off an widespread conversation amongst women, moms like us, families and the public. The incident generated international coverage and was widely condemned, both in India and abroad.  Protests took place across the country. We all watched as women took to the streets. 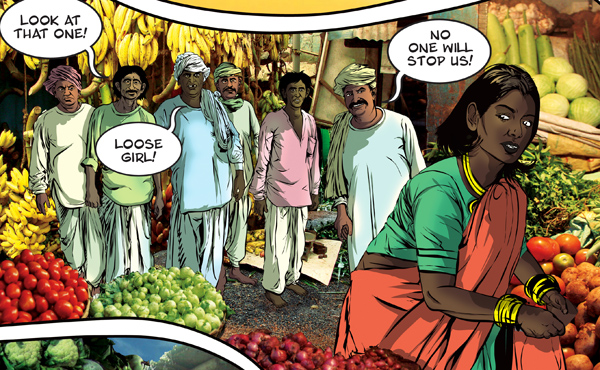 It was during this time that one man, U.S.-based film-maker Ram Devineni, one of the comic’s creators, stood up and decided he would do something to make a difference in this cultural problem. His motivation gave birth to a comic book, called Priya’s Shakti. 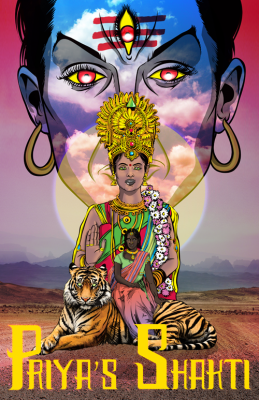 “I was in Delhi when the horrible gang rape happened on the bus in 2012, and was involved in the protests that soon followed,” said Devineni. “Like many people, I was horrified by what had happened and angered by the indifference exhibited by government authorities at every level. There was an enormous outcry in particular from young adults and teenagers — both women and men. At one of the protests, my colleague and I spoke to a Delhi police officer and asked him for his opinion on what had happened on the bus. Basically the officer’s response was that “no good girl walks home at night.” Implying that she probably deserved it, or at least provoked the attack.

I knew than that the problem of sexual violence in India was not a legal issue; rather it was a cultural problem. A cultural shift had to happen especially views towards the role of women in modern society. Deep-rooted patriarchal views needed to be challenged.” 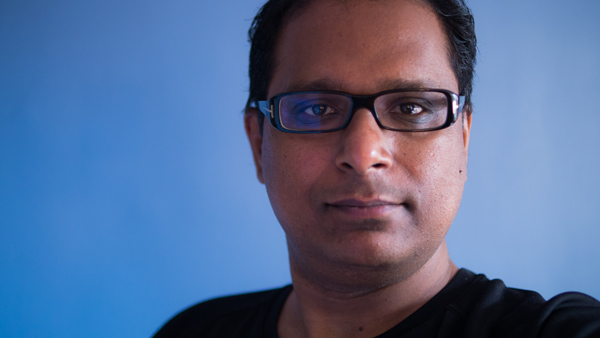 Priya’s Shakti is a tale of strength, just like its name, ‘Shakti’ which means strength. Priya is a superhero.  The storyline focuses on Priya, a human woman and ardent devotee of the Goddess Parvati who has experienced a brutal rape and the social stigma and isolation resulting from it. The Goddess Parvati is horrified to learn about the sexual violence that women on Earth face on a daily basis and is determined to change this disturbing reality. Inspired by the Goddess, Priya breaks her silence. 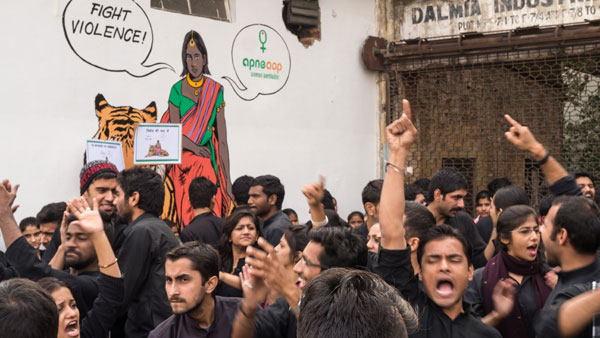 She sings a message of women’s empowerment that enraptures thousands and moves them to take action against GBV around the world. This project highlights the threat of sexual harassment and violence that women face on a daily basis unless deeply rooted patriarchal norms are challenged.

“The story is a new Hindu mythological tale where a rape survivor, Priya, and the goddess Parvati challenge and address gender-based sexual violence issues in India.”

He says the goal of this project is to challenge deeply rooted patriarchal views and create empathy and identification with survivors of rape and gender-based violence — so they feel comfortable seeking justice and begin the process of healing.

“I think domestic and sexual violence is a taboo subject matter not discussed in the South Asian community, which only fuels the problem and creates a cultural where it can happen.”

He felt a comic book was the right format because comics are also a big part of Indian culture. 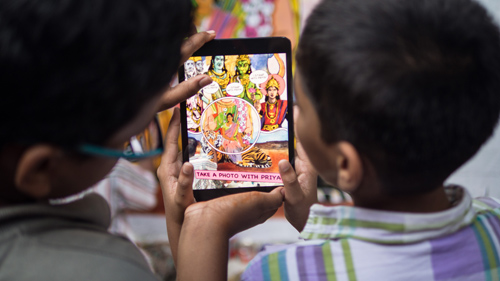 “I selected the comic book format because I grew up reading Amar Chitra Katha comic books and was hugely influenced by them. I think millions of children have read the series, and they’ve entered the collective consciousness of contemporary Indian culture. Often, I first learned about Hindu mythology through their comic book series. Also, comics are an important part of our culture, and hugely popular with teenagers and young adults,” said Davineni. “Now, comic books have entered the commercial mainstream. Every summer, Hollywood releases huge budget blockbuster films based on comic book characters to enormous box office returns. Comic books characters like Superman, Batman, and Wonder Woman have become modern mythological icons, and other comics book stories such as Art Spiegelman’s “Maus” address important historical events. We are using existing constructs that are familiar to everyone in India, but presenting them in a fresh and original way.” 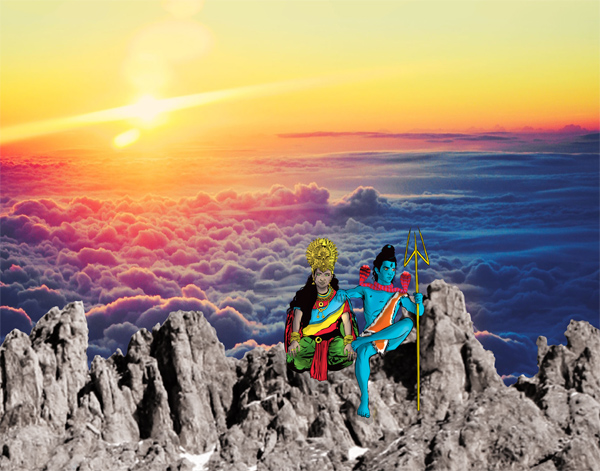 “In my opinion, the core essence of Hinduism is about conquering your fears. In the story, Priya confronts the tiger that has been stalking her. She turns her fear, the tiger, in to her power — her shakti. Also mythology is the story of us.”

“So, I began formulating a new mythological tale where a mortal woman and rape survivor would seek help from the Goddess Parvati — only after she had nowhere else to turn. Although Lord Shiva and other gods get involved, eventually it is up to her to challenge people’s perceptions. I wanted to create a new Indian “superhero” – Priya, who is a rape survivor and through the power of persuasion she is able to motivate people to change. The goal of this project is to challenge deeply rooted patriarchal views, and create empathy and identification with survivors of rape & gender-based violence — so they feel comfortable seeking justice & begin the process of healing.”

Choosing a female superhero who is also as a survivor as the main character for the comic, he says was important.

The main character in the comic book, Priya, who is a survivor of rape, has become a global phenomena and one of the “top ten female comic book characters to watch out for in the future,” said “Devineni. “Priya’s struggle resonates really well with audiences all over India – and even in other countries. Priya’s asks a universal question, which everyone goes through, and especially teenagers – what is my role in the world? In future issues of the comic book, we plan to address other problems and bring Priya into cities and other parts of India and the world. She plans to have more adventures and we plan to develop her character more. Also she will address other gender-based issues.” 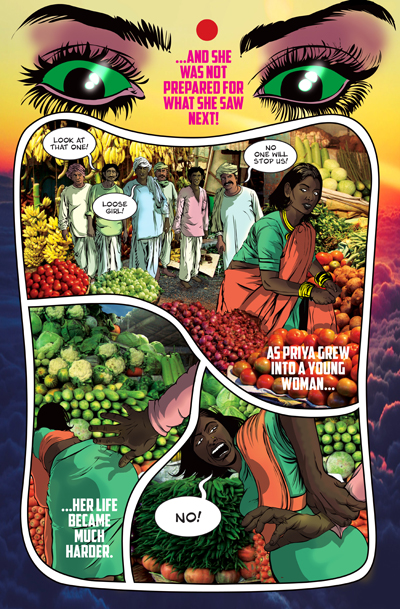 Devineni says the comic book is meant to raise awareness about the issue within a younger audience.

“India’s population is very young. Nearly half the population is under 25 years old; and they are the main audience for our comic book. Although our goal is to eventually reach wider audiences, we have chosen to initially focus on a huge demographic that we believe will be very receptive to both the message and the format of the comic. Also, it’s perfectly designed for teenagers – can be read in 15-20 minutes but the message resonates beyond. It’s highly shareable and very interactive.”

Devineni says the comic book is part of a larger discussion that needs to happen in schools and communities and it’s an important tool to start that discussion. His team is already working with a major NGO – APNE AAP to bring the comic book into the schools in India. 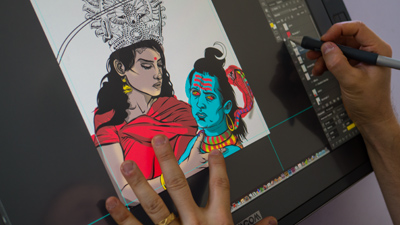 But can books really make a cultural shift?

“India already has very strong laws in place against rape and violence, but they are ineffective unless rape survivors feel comfortable pursuing justice and are not threatened or risk their lives,” said Devineni.  “I think the most important thing we want to emphasize with the comic book is that change is possible. Trying to create a cultural shift is incredibly difficult, but not impossible. India is going through some remarkable and monumental changes in a short period of time. People’s views have not caught up with the speed in which things are changing in India. But, what was clear to me from the massive protests that happened all over India after the horrible rape on the bus is that we want things to change in our country. There were so many teenagers and young adults at those protests, and they will be the future catalyst and leaders who will define India, which is a hopeful sign.”

You can download the book for free at:  www.priyashakti.com/comic/

Learn more about Priya’s Shakti on: