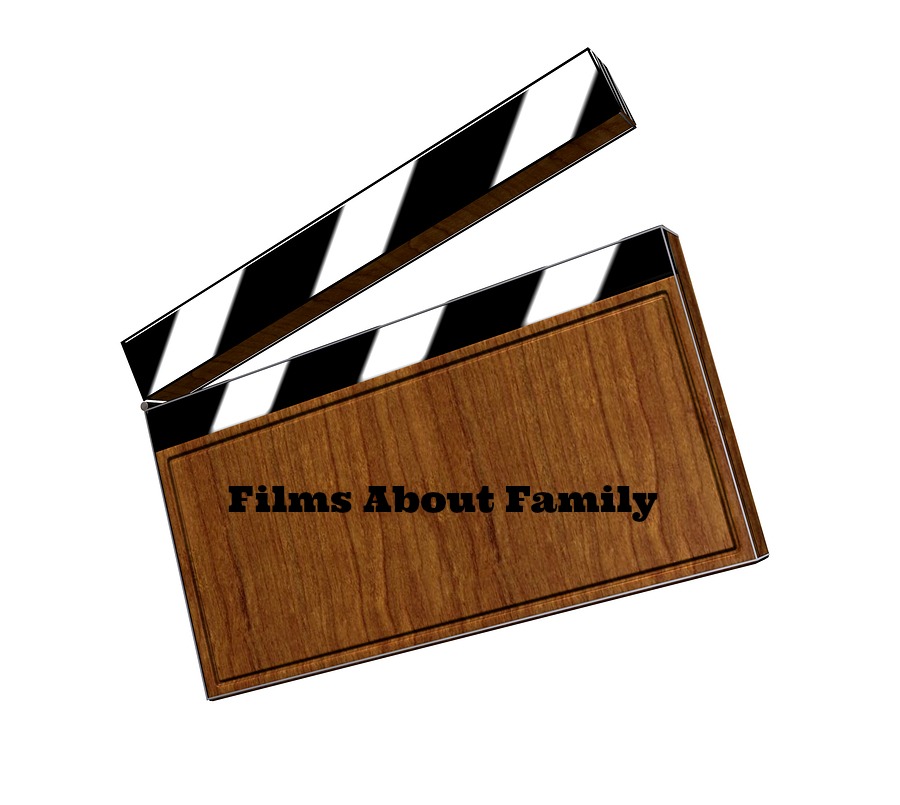 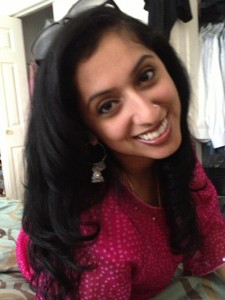 For those who love Bollywood Films…and Kollywood Movies

It’s the holiday season and almost everyone around me is busy making plans to travel to visit family or host relatives. Holiday music is playing in the stores, streets are brightly lit with strings of Christmas lights, dinner menus and gift lists are being written and everything just feels … festive. Whether you celebrate Eid, Diwali, Hanukkah, Christmas or anything else in between, the primary focus is always about spending time with family and celebrating togetherness.

Family has always been a central theme of Indian films. Love and Romance, Revenge, and Fighting for Justice certainly feature strongly, but Family has always driven the story, whether it was the main character’s motivation or obstacle. Some of the biggest hit movies have had no real storyline aside from family bonding (cough, cough – Hum Aapke Hai Koun).

So for the holiday season, I’ve picked my “Top 10 Bollywood and Kollywood films” that are all about family – the good, the bad, the ugly and the blockbuster song and dance extravaganzas.

The tagline is literally “It’s all about loving your family”. This Karan Johan melodrama blockbuster centered on a family that was completely co-dependent, but it’s okay because it had rich beautiful people, epic dance sequences, everyone’s favorite SRK-Kajol jodi and of course, Amitabh Bachchan. 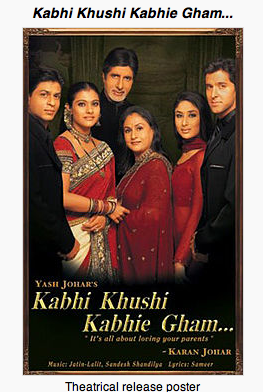 This unusual and sensitive Gulzar film was quite poignant when it released in 1982. Though it starts out as a sunshine and rainbows portrayal of family life starring Naseeruddin Shah and Shabana Azmi, it quickly spirals into a dramatic story of a family shaken by the arrival of a little boy. A must see! Warning: may be a bit serious for the younger lot. 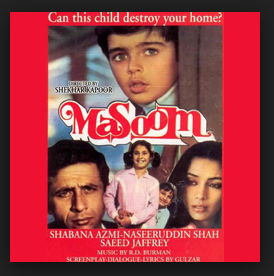 This Tamil film stars Prakash Raj as a neurotic and overprotective father of a bright and lovely daughter played by Trisha Krishnan. His entire world is shaken when his daughter announces that she is getting married and leaving. Heartwarming, funny and tear-jerking at various moments, this film is sweet and simple. 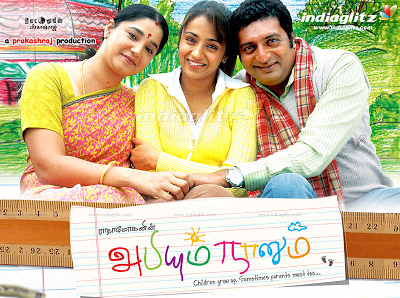 I’m very biased when it comes to this movie because it is my absolute favorite. This Hindi remake of the musical 7 Brides For 7 Brothers is an off-beat, quirky film but songs like “Zindagi Milke Bitayenge” and “Dukki Pe Dukki Ho” really epitomize ‘family spirit’. Amitabh shines in his double role as eldest brother Ravi and the dark, brooding villain Babu. 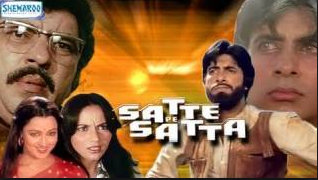 Tamil star Surya stars in this unusually sensitive film in which he plays both the young hero and his aging father. Their relationship takes center stage in the film despite it showcasing both generations romancing their respective heroines (Sameera Reddy for the son, Simran for the father). 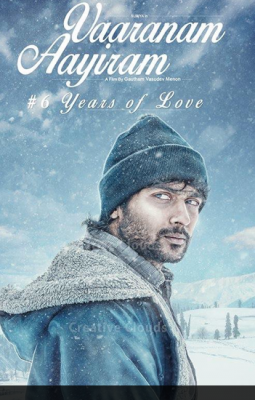 The ultimate cheesy family extravaganza! I know everyone makes fun of this movie but I still love it. It’s so fun to watch. Everyone is so happy! It’s like Hum Aapke Hai Koun, but with even less character development. To be fair, it’s hard to develop characters when you have a story about a household of roughly 15 people. Watch for the gorgeous outfits that Tabu, Sonali Bendre, Karisma Kapoor and Neelam wear, if nothing else. 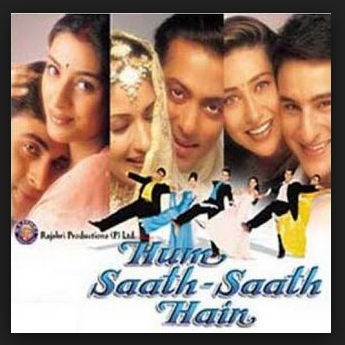 This black and white film might be an odd choice, but the family portrayed in it rivals the size of the clan in Hum Saath Saath Hai! Ashok Kumar plays the dashing father of 8 children who see him only on weekends as he works in another city. Nirupa Roy plays the soft-spoken mother who we quickly find out is pregnant with her 9th child! The cast is rounded out with the boisterous and lovely Rajshree, Indrani Mukherjee, Shobha Khote, Mehmood and Manoj Kumar. All is happiness and smiles until the arrival of a mysterious boy on their doorstep. Now that I think about it, this movie is ripe for a Sooraj Barjatya makeover! 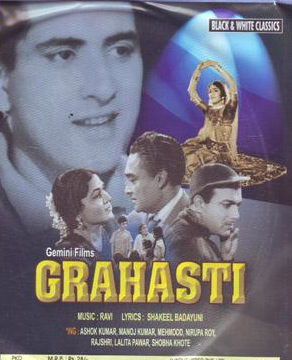 The original Khubsoorat (1980) features Rekha as the brash and affectionate Manju, who crashes into her sister’s married home causing havoc but ultimately opening their hearts. Most of the film plays out within the walls of the family home where her older sister Anju (Aradhana) is the dutiful “bahu” which gives lots of scope for family drama but also fun. Rekha is an absolute delight in this movie.

The most recent film on this list, 2 States is a fun and flippant look at cross-cultural relationships even within India. This is probably the most amazing aspect of marriage/relationship issues for those outside of our community – that even within our own race that there are so many lines and boundaries and differences. South Asian marriage is complicated by the fact that it is traditionally the bonding of two families, not just two people. 2 States does a decent job of portraying that struggle to connect when the marriage has the added conflict of distinct socio-cultural backgrounds. And Alia Bhatt is adorable in it. Warning – has some “sensual” scenes in it that may be very awkward to watch in a family setting. 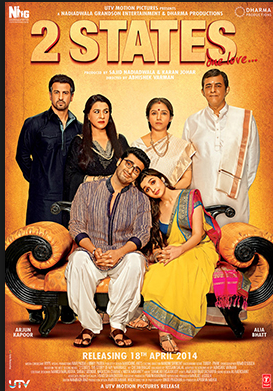 I tend to be an evangelist of this movie, even if I have to sell heavily moustached South Indian heroes to my friends with more delicate preferences. But this Tamil retelling of Sense and Sensibility has a powerful cast (Tabu, Ajith Kumar, Aishwarya Rai and Mammooty), gorgeous scenery, a pretty soundtrack by A.R. Rehman, great moments between two female leads playing sisters and did I mention Tabu?? She is stellar in this. See it for her and Aishwarya.

I know there are a great many films about family that I haven’t included in this list, so if you have some films that you feel are the ultimate family-centered movies, please do let us know in the comments. Also if you get around to watching any of these let us know your thoughts! 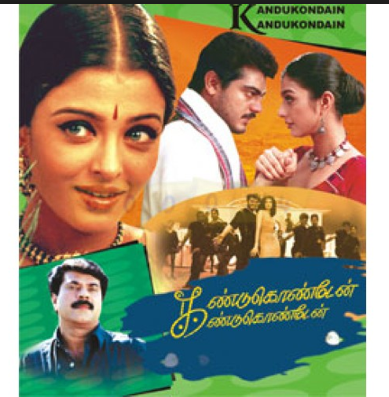 Enjoy the holiday season and wishing everyone a safe and Happy New Year!