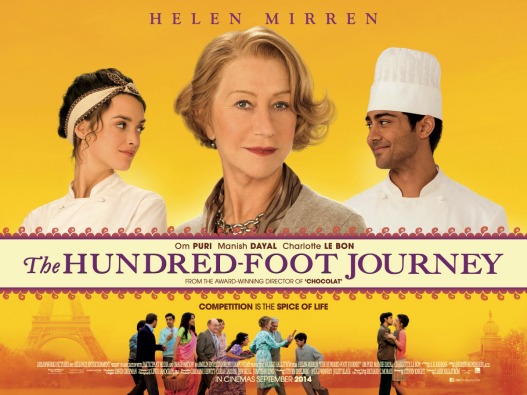 While we may never see a time when Bollywood Movies are widely embraced outside of South Asia, Indian culture has become a rich and vibrant setting for filmmakers to tell great stories to worldwide audiences. Most moviegoers find the structure of a typical Bollywood film – three to four hours of song and dance with occasional breaks to push the plot forward just enough to warrant a new song and dance number – to be difficult to sit through, but the energy in these films is contagious, and Bollywood has become a big contributor to Indian culture throughout the world.

In a film like The Foot-Hundred Foot Journey, we are taken into the lives of people who would have grown up watching Bollywood movies, families who listen to music rich with joy and energy and share strong familial bonds. Bollywood hasn’t exported its characters to North American films; rather, it’s the Bollywood audience who are now playing the parts. 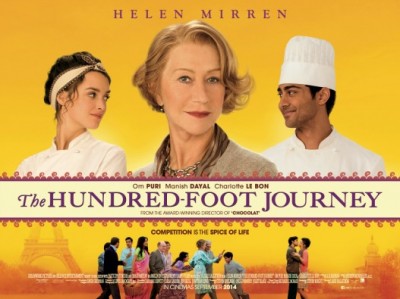 The stage for The Foot-Hundred Foot Journey is set when a fire destroys a family run restaurant in India, with tragic consequences, forcing the family to pursue a new life in London, which they quickly abandon because their new home is seemingly located not more that 200 meters from a Heathrow runway.

The family quickly escapes to France and, after their car breaks down, find a new life in an idyllic town in the French countryside. If all of these plot twists seem a little forced, it’s because they are, but the movie finds its charm when Papa finds an old restaurant in the village, which he believes that his family is fated to take over. Papa and his family, led by his son Hassan, begin to serve Indian food across from a very prestigious restaurant run by Madame Mallory, played by the great Helen Mirren, whose entrance marks the point where the film becomes very enjoyable.

The story focuses on Hassan, a promising chef, as he becomes intrigued with French cooking, spending much of the film preparing and mastering dishes, partly in an effort to impress Marguerite, who came to the family’s rescue when they were stranded in the countryside. Director Lasse Hallström, who also made Chocolat, doesn’t quite capture the sensuousness associated with French Cooking; in this film, food preparation is mainly a weapon in war between two rival restaurants, with Madame Mallory and Papa deploying all conceivable tactics to weaken the will of the other, from purchasing all the food at the market and drowning the area ambiance with loud music, to submitting an endless barrage of complaints to the exasperated mayor of the town.

The film didn’t make me hungry and the movie is not really about food, it’s about finding love and the soul behind one’s calling in life. The movie excels at unwrapping the bottled emotions of its characters and touches briefly on the immigrant journey. You can’t help but feel joy as the characters find what they’re missing in their lives. Helen Mirren tugs at your funny bone while Manish Dayal grabs your heart.

Check out the trailer for the movie below!

When I talk with friends about what we are watching these days, the conversation inevitably turns to television. Filmmakers are increasingly turning to TV to explore plot and character development with a depth that a 2-hour film cannot offer, but that very depth makes television characters a part of our lives for an extended period, which lowers their mystique.

It’s at the movies that fairy tales can be told, and The 100-Foot Journey is one of these fairy tales, briefly inviting the audience into the lives of two couples finding happiness through work and through play. The very lightness of the story telling allows the audience to leave the film imaging that the characters will live happily ever after, and it’s a nice feeling; it’s why we go to the movies.

Definitely a feel good movie worthy of curling up in front of with some Tea India chai and pakoras!

Born in Sri Lanka, raised in Dubai, Bahrain, Pakistan, the U.S, Australia and England, Yashy now finds herself settled in Toronto, where she met her husband and her two kids were born.Yashy strives to strike a balance between baby and self from the very start of motherhood with the goal to maintain the pre baby lifestyle she enjoyed, post baby (…babies).This city living gal and her family share their love for travel and dining out with tots on the family lifestyle blog www.babyandlife.com. You can find Yashy on Twitter and Instagram most days lusting after the next travel opportunity and sharing food and baby pictures alongside events happening in Toronto!