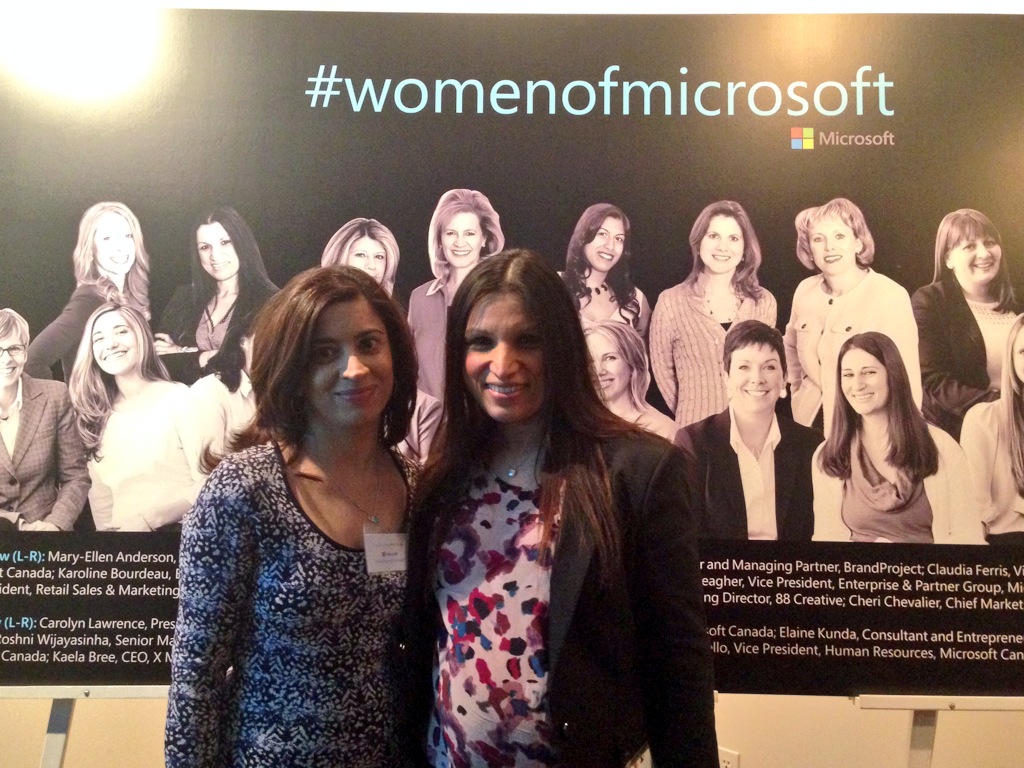 Chitra Anand: Profile of a Masalamomma

With today’s corporate workplace still lacking in female representation at the top, Chitra Anand is a trendsetter indeed. Carving out her dream career and passion for innovation, this masalamomma is a new breed of business innovator–she’s an intrapreneur. 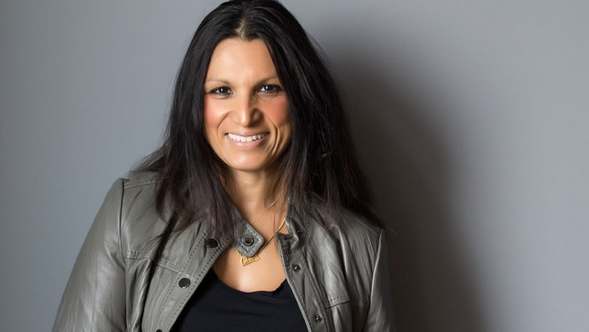 In her current role as Head of Public Relations for Microsoft Canada, her team is responsible for creating compelling stories as they relates to Microsoft technology and the impact it has on both consumers and businesses in order to change brand perceptions.

As one of the faces behind, the ‘Women of Microsoft’ initiative recently launched by Microsoft Canada, she is raising the bar when it comes to showcasing the contributions of women in technology.

On March 7, in honour of International Women’s Day, Microsoft Canada unveiled a portrait at an exclusive event, showcasing 10 aspirational Canadian women who have used Microsoft technology as part of their success, alongside the female executives who make up Microsoft’s own Canadian Leadership Team (CLT). More than 50 per cent of the leadership positions on Microsoft Canada’s leadership team are occupied by women, including President Janet Kennedy. 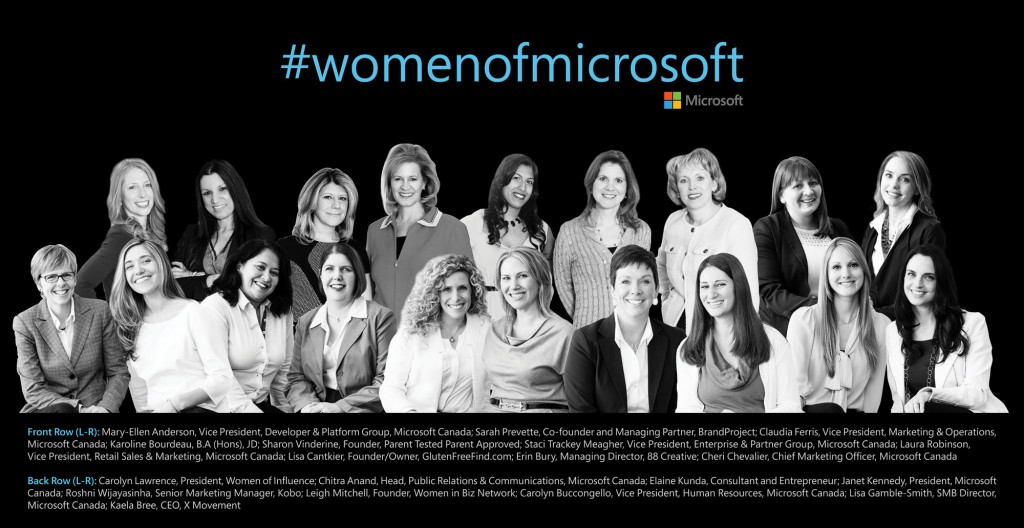 Before joining Microsoft, Chitra spent 10 years with one of Canada’s major telcos, where she helped re-frame the way they talked about products and services by making messages simple yet interesting for the marketplace. At her last position at TELUS, where she started in her twenties, she had a very successful trajectory.

But Chitra wasn’t always a ‘techie’. She originally started out in finance but gravitated toward marketing and PR.  Chitra says she just ‘fell into technology’ and just ended up ‘loving it.’  She adds, she specialized in communications; innovations and marketing but cultivated her passion point in technology.

“I’ve always been a person inspired by solving problems and technology was industry exploding at that time when I started out.”

She was recruited by Microsoft Canada at a time where most women wouldn’t have been taken on.

“I feel fortunate to be at Microsoft because I was headhunted for this role when I was 8 and a half months pregnant. I wasn’t a terribly big pregnant woman and I was hesitating on whether I should hide my pregnancy. My husband said to me, ‘If you’re going to be discriminated against because you’re pregnant, then you don’t want to be there.’ As much as I agreed with him, I was a bit skeptical going in. I felt like,  ‘I’m 40 now and I have to be true to myself,” said Chitra.  “I went through 8 interviews and was awarded the job because I was the best person for the job. I took a condensed mat leave and I went to work when my son was two months. My husband and I tag teamed.”

Watch our webisode with Chitra on: Being a South Asian Mother in a Technology Career

So what advice does she have for moms in corporate going back to work?

“I think the opportunities are out there but they are rare. You need to find to find companies, organizations and leaders that have a belief system in your values.”

Chitra started solving problems in technology in her career…and never stopped. Her reign in public relations soared to win her several awards along the way. One of her most innovative campaigns was the launch of the Surface 2 for Microsoft Canada. With a pulse on youth culture she convinced the heads at Microsoft that if they were going to make their mark on the launch, they needed to do something completely different.

Her definition of that was to make it ‘Deadmau5-different’.  Hiring the world-renowned DJ to be part of their launch was in Chitra’s mind, the biggest step. 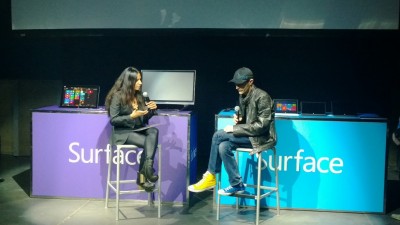 “Everything I do is always led by an insight or research. If you truly want to make a mark, it has be radically different,” said Anand.  “We dropped rumours from the day that Surface was going to be launched and it was a constant pace of dropping messages.  The reason we chose Deadmau5 is that he’s a technologist before he’s an artist. I found him and studied him.”

Did it work? Chitra says you bet it did.  The event’s hashtag alone, #surfacehaslanded trended in Toronto within just hours of the ‘surprise’ announcement.

Why the collaboration?  Chitra says, “He needs technology in order to produce his music, so it was a very mindful choice. We wanted to show that technology enables your passions. Everything we do as human beings, our passion points, are all fueled by technology.”

As a mom, with another child on the way, we asked Chitra if that same technology has helped her in the balance between motherhood and her career.

If you look at this notion of work life balance, that just doesn’t exist anymore. It’s all about work-life integration.

So if I have to leave at 2pm in the afternoon because my son is sick and I have to take him to the doctor, I will do that. I will take my conference call in the car. I will then come back and log on if I need to but it’s about my life intersecting and technology is allowing me to do that. It’s how I’m able to have a career and be a mother at the same time.”

While many may criticize technology for replacing personal relationships, Chitra cautions, it’s up to moms to be responsible and own their time.

“It’s incumbent upon us to find balance and that is our responsibility as moms,” said Anand. “When I come home and I’ve got x amount of time with my son, I put my phone away. If you’re constantly checking your phone, that’s not productive. It’s part of social etiquette to put your phone away when you’re at dinner as well.  I think we have to really establish boundaries for ourselves. We need to own it as professionals.”

Her own father has helped Chitra find her sense of drive and commitment in who she is today.  Her father suffered from polio at a very young age and one of his legs became lame due to illness.    Watching him left her with a whole new appreciation not just for parenting but also for pushing yourself.

“I’ve never in my entire life heard him ever complain, feel like he was disadvantaged because of it — ever. That has really impacted me. When I catch myself saying, ‘oh this is too hard,’ I look at him and think, here’s this man who can barely walk, is a visible minority and has built this life for himself. It’s given me fuel and driven me.”

In addition to her role at Microsoft Canada, Chitra currently teaches and lectures at Humber College in their postgraduate business program.  She graduate of the Kellogg-Schulich Executive MBA program and is currently pursuing a part time PhD at the University of Bradford in the UK.

Learn more about Chitra at: chitraanand.com