Is Campaign to Raise Awareness About Domestic Violence Giving the Right Message? 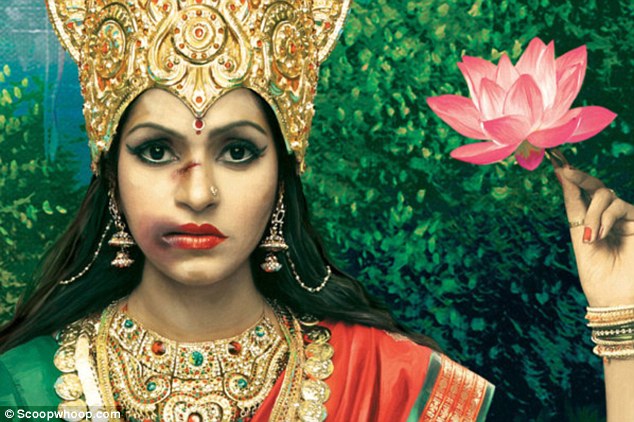 What Those Battered Goddesses Won’t Say 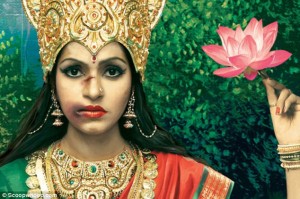 An ad agency recently created images of three Hindu goddesses apparently to spread the message against domestic violence in India.  I’m not sure what the logic behind this is.  And here’s the problem.

The ad seems to be a warning (to Indian men?) that since 68% of women in India are already victims of domestic violence, you better watch out, or else you’ll be battering your hallowed goddesses next. The caption reads “Pray that we never see this day…Tomorrow it seems no woman shall be spared. Not even the ones we pray to.”

To me it sounds like it is telling Indian men: You may think you are beating up the trifling women, but watch out! In your blind fury without knowing it you might also end up walloping the sacred ones!  That sounds like, there are women that men can beat, and women that men should not beat because they are ‘sacred.’

Men have names for the one’s they believe they can batter, rape and kill.  Names like – bitch, witch, whore, slut and more.  These are the ones they believe deserve to be beaten, raped and killed, because they are not “sacred” like Goddesses! Of course they know their boundaries!  They’ve already got the women nicely demarcated!

Secondly, it is interesting how carefully a little black bruise is placed somewhere on the perfectly, made up face of these ‘abused’ goddesses.  Very carefully – so as to not spoil the pretty faces.  I’m thinking either this artist has had amnesia about battered women’s faces or else thinks that goddesses take battering differently from human women.  Or a more alarming possibility – thinks there is a certain kind of beauty on a woman’s face after it is battered!

But the real, every day battering that women take involves swollen tissues and muscles, distorted facial features, disheveled hair, broken teeth, broken bones – not a pretty sight.  And then since we are talking India, the battering, the violence, takes some terrifying dimensions.  Thousands of women are doused with kerosene and set on fire and hundreds of women have acid thrown on them.

Their skin and bones melt, get charred, scarred, and so distorted that they are stripped of a ‘human’ face.  What would these goddesses look like if the artist was true to the reality of the violence inflicted on Indian women, daily.  There are women who are hanged, women whose noses are chopped off.  Remember the Afghan girl with her nose chopped off? Well, how would that face look superimposed on that of one of these goddesses?  How about superimposing the burnt out skeletal remains of the thousands of women burnt to death for dowry on the faces of these goddesses?

Perhaps not because that would draw attention to the role of the violators, the brutal inhumanity they inflict on other human beings every day.  Is that too discomforting?  Would that put violent men too unnervingly close to their brutal acts and their consequences?  Would that put them too uncomfortably close to a face that says: “This is a crime against humanity.  It is violation of a woman’s human rights.  And you are accountable to the law, to your own conscience, and to whatever god it is that you believe in?”

Rita Banerji is an author and gender activist, and the founder of The 50 Million Missing Campaign to end India’s female genocide.

Her book ‘Sex and Power: Defining History Shaping Societies,‘ is a historical and social look at how the relationship between gender, sexuality and power in India has led to the ongoing female gendercide.