The Mamma Mias of Indian Cinema

“Mamma Mia” is one of the very few Hollywood films that explore the dynamics of mother-daughter relationships.  I think that’s a pity given all the talk about female role models for girls.  The fact is no prototype, however strong or famous, can overshadow the one and most powerful female role model in any woman’s life.  And that is the woman she has the longest and most intimate relationship with – usually her mother.  ‘Mom’ is the ultimate “mirror” in which most women reflect on— (i.e. examine, accept, reject, or refine)—their own images of femininity, womanhood, self and life!

Still, where Hollywood furnishes a few such films, the Bollywood (the Indian film industry) archives come up with practically nothing!  And I say this because I’m doing a search of those archives right now.  The campaign I founded on female gendercide in India, The 50 Million Missing, is doing a series of film reviews on gender in Indian films this year, it being Bollywood’s 100th centennial.

However, as I was not able to locate any Bollywood film with the mother-daughter relationship as the core theme, I began to examine how mother-daughter interactions are portrayed within the sub-context of various films.  And I share my observations on five of these films below: 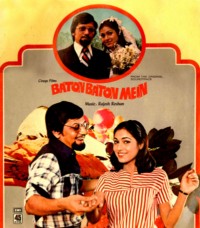 1) Baton Baton Mein (While We Were Talking), 1979 :  This is a film I’ve watched numerous times, and in terms of film making, acting etc. it definitely features in my personal list of the top 100 Indian films.  Another reason I like it is because it rebuffs the traditional indoctrinations about arranged marriages and forbidden, hidden love of mainstream Indian cinema.  It tells a story about a small, Christian Indian community in Goa whose lives and social dynamics are different from what most people associate with India.

Nancy and Tony meet on the train while commuting to work and while talking they get to like each other.  Nancy’s maternal uncle plays Cupid and encourages the blossoming romance between the couple arranging for them to go on dates.  Nancy eventually invites Tony to her home, to meet her mother, and Nancy’s mother though initially uncertain about Tony’s prospective as a husband for her daughter, warms up to him once she has investigated his background, by plying him with indirect questions.  Indeed Nancy’s mother, uncle and aunt also ploy to keep other potential female suitors, Nancy’s single friends for instance at bay, should one of them decide to ‘steal’ Tony from Nancy.  What is interesting here is that Nancy and Tony though they like each other’s company are both uncertain about marriage.

And Nancy is quite clear about establishing her boundaries for personal choice with her mother.  She resents her mother’s attempts to dig into personal details about Tony’s family, job and salary, and has forbidden her to directly raise the topic of her marriage with Tony.  She refuses to wear the dress her mother thinks would make her look more attractive to Tony, informing her that she thinks Tony likes her for who is, and not what she wears.  And when her mother laments to her relatives, that she can’t understand why Nancy keeps on dating Tony even though there seems to be no talk of marriage yet, she informs her mother that she is seeing Tony because she likes to spend time with him.  As she confides in Tony, she believes marriage is something only she and Tony should decide on, and not her mother and the rest of their families.

2) Zubeidaa (2001) :  Zubeidaa, the central character of this film (incidentally based on the life of an actual person), like Nancy wants the freedom of space and choice for her own life.  She dreams of being an actress.  Her father who is a film producer, does not want his own daughter in films.  He physically yanks her out of the film studios, and rapidly arranges for her to be married to his friend’s son.  When he tells her, that her mother will teach her domestic chores and on how to be a good housewife, she informs him she has no interest in learning such things.

Zubeidaa resists the impending marriage, often screaming hysterically, threatening suicide with a gun, and tells her mother that her father has no right to marry her off without her permission and crush her dreams.  Her mother tells her that her father, who she reverentially refers to as ‘Sahib’ (Master) always does what he wishes.  When Zubeidaa’s rage continues unabated her mother uses emotional blackmail to harness her daughter’s dreams and her willpower.  She reminds Zubeidaa, how she often has to suffer violence at her father’s hands. But when Zubeidaa fights and resists him this way, then he vents that anger also on his wife! 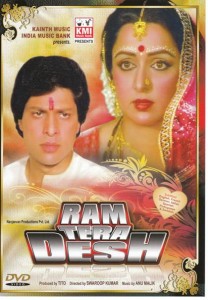 3) Ram Tera Desh (Your Country, O Ram!), 1984:  The protagonist Sunita, endures what thousands of married women in India continue to endure or die to each year.  This includes persistent demands for more dowry, extreme abuse and various forms of violence from the husbands and in-laws, including rape and attempts to kill her.  When Sunita tries to move in with her parents, her mother pressurizes her to return to her husband, and reminds her of the Indian tradition that they expect her to also uphold, the one that says “A daughter leaves her father’s home in her wedding palanquin, but may return only in a coffin!”  Sunita then returns to her husband but fortunately has the sense to escape from the house when an attempt is made to burn her to death.  She then runs into a feminist lawyer, who teaches her it isn’t enough to simply walk away with her life, but she must fight for the justice under law that is due to her.

4) Ab Insaf Hoga (Now There Shall be Justice), 1995:  Janaki the central character of this film, is a poor, construction-site worker who is gang-raped by the wealthy company owner and his friends.  Her husband who is crippled dies attempting to avenge her, and Janaki is left to fend for herself and her small daughter.  As she roams the streets homeless and hungry, she’s given shelter by a well-do man, who also befriends her.  Under his roof, Janaki regains her strength and gets a new perspective on life. 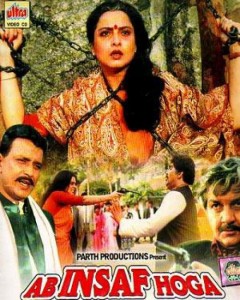 Where she considered herself powerless against men like the wealthy, politically well-connected industrialists who raped her, she is now determined to avenge not just those men but the social and political system that sustains this kind of misogynistic oppression of and violence on women.  She becomes a political leader and a mother figure of sorts to women in society who approach her for help and protection from various forms of violence, both from the system and from their own family members.

In the end she does kill the industrialist and his mates who had raped her, not simply as an act of revenge but to protect her grown up daughter, who they’ve vowed to rape too.  The last act, where one by one she plunges a sword into these men, is a statement of utter desperation – of not just her as a mother of a daughter, but of a symbolic mother in India, who sees no other way of protecting her daughters and hoping for a just society for them to live in.

5) Shadi Karke Phans Gaya Yaar (I’m Trapped in my Marriage!), 2006 : There’s a reason I’ve kept this film for last.   If you go by the dates I have next to each film here, this is the newest.  But what I’m finding consistently as I move from the 1960s towards the 2020s, is there is a shocking regression in how Indian films are treating the issue of gender subjugation and violence at all levels.  If I’m coming down the line of films I’ve mentioned above, how would I expect the newest films to deal with the mother-daughter equation? Probably to take it to the next step and affirm the independence, dignity and individual choice of each woman, mother or daughter.   But that’s not how this film, meant to be for a ‘family’ audience, concludes things.

This film is about a man Ayan, who’s from a large, traditional, joint family, and who woos and marries Ahana, shown to be a ‘modern’ apparently westernized, Indian woman, and how his traditionalism clashes with her modernism and causes a break-up in their marriage.  When Ahana finally decides that she needs to leave Ayan, she also discovers that she’s pregnant.  At that point she decides that she’d rather have an abortion.  But Ayan believes that she’s not entitled to that choice! He informs her that if she “kills his child” he will “kill” her whole family!

The reason Ayan is furious with Ahana’s family, particularly her mother is because he believes that it is Ahana’s mother who has put this idea about her bodily and reproductive integrity into her head! He sees Ahana’s father as cowered by her mother because he does the chores around the house.  As far as Ayan is concerned he has ownership of Ahana’s body and uterus that contains his incubating sperm! Ahana’s mother rises to her daughter’s defense, and tells him her daughter is free to make any choice about her life, be it about marriage, divorce, career, baby or abortion, and if she wants an abortion she will help her make an appointment.

Ayan believes that this is the corruption of Indian families through western thinking and that Ahana’s mother is corrupting her mind and trying to live through her.  He takes his fight to the court. The judge, a woman, agrees with him, forbids the abortion, and grants him permission to actually live in the house of his separated wife, with police protection, for himself and his ‘unborn’ child, till the baby is born.  By the end, Ayan has managed to bring both his wife and her mother to their knees, to beg for his forgiveness.  This last film is so nauseatingly misogynistic, I cringe to end recommend anyone to watch it.

None-the-less it has been popular among Indian audiences, and if for nothing else, one certainly needs to see it just to ask – Why?

What do you think of the portrayal of mothers and daughters are portrayed in Bollywood films? Share your comments here!

Rita Banerji is an author and gender activist.  She’s the author of ‘Sex and Power: Defining History, Shaping Societies,’ a historical look at the relationship between gender, sexuality and power in India, and the founder of The 50 Million Missing Campaign.  Her website is www.ritabanerji.com and she tweets at @Rita_Banerji.