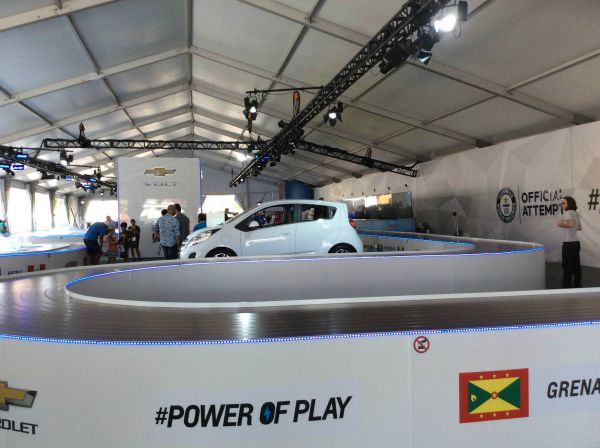 Ever wonder how ‘Green’ cars work? What’s all the talk over electric-drive cars and recycling of batteries?

Well, as moms who drive kids everywhere and are trying to understand the choices out there, Chevrolet Canada’s commitment to sustainability with its battery technology is an eye-opener. A typical question new buyers often ask about electric vehicles is, “ what happens to the battery when it dies?” The answer was show in an innovative experience at the Toronto Pan-Am Games General Motors “Volt Power of Play” booth at Exhibition Place.

Chevrolet Canada, showcased just how well their technology with the Chevrolet Volt stacks up.  The Volt battery was part of a Chevrolet Power of Play exhibit at CIBC Panam Park from July 17-24 and participants including several Canadian athletes went  head-to-head on a 1,038-foot slot car marathon track, powered by secondary-use Chevrolet Volt batteries.  Each person used race cycles powering secondary-use batteries to race slot cars.  The electricity generated was used to generate the speed and control the cars.

The members who took part in this challenge set a Guinness World Record for most people generating electricity. Over 4000 people generated more than 13,000 electrical watt hours of electricity, that’s the amount of energy needed to power a Chevrolet Volt to drive 60 km! 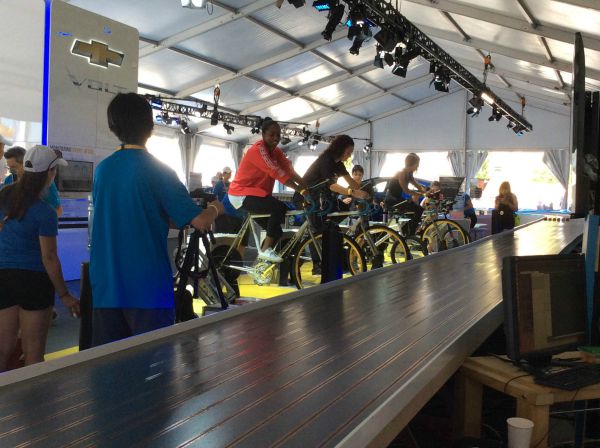 Athletes, like Robyn Gayle, a 2012 Olympic Medalist, was more than happy to have a little friendly competition too!

“I think it got a little competitive and they went a little faster than they would have liked, but we’re athletes and that kind of just happens,” said Gayle.

She said she was surprised to learn about life of  Volt batteries and their usage.

“You have these batteries that you throw out after 7 or 8 years and they have 50 percent of their life usage still left and that’s unused. So it’s pretty cool to know that they’re working on ways so that that energy isn’t wasted and that there are ways to do it in an environmentally friendly and efficient way that is only better for all of us in our environment.

“We wanted to use our Power of Play demonstration not only to offer a fun, interactive way for fans to have their own friendly competition, but also to put our technology in the record books,” said Hossein Hassani, Director of Enterprise Marketing for General Motors of Canada. “Power of Play has been an illustration of the potential secondary uses for the batteries in Chevrolet Volt electric vehicles, as well as a means to test how renewable energy sources can generate stored electricity while minimizing environmental impact.”

The Chevrolet Volt batteries used in the exhibition are batteries that have exceeded their eight-to-ten-year lifespan on the road. Even after the end of that lifespan, they still have fifty to seventy per cent capacity remaining. That capacity can be used to provide backup power, peak rate shaving and renewable energy storage for both commercial and non-commercial uses, and it can deliver waste reductions and economic benefits on an industrial scale. 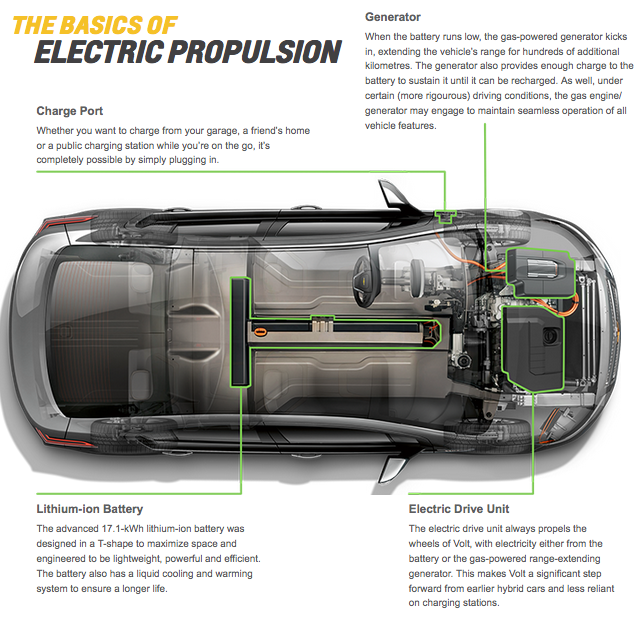 The Pan Am Chevrolet Volt activation was not just about racing, it was a hands-on experience and showcase of the potential secondary uses for the batteries in Chevrolet electric vehicles. More importantly it was a way to test how renewable energy sources can generate stored electricity while reducing environmental impact.

Thinking of Buying an Electric Car?

If you’re wondering about whether you’ll be spending more time at the pump, think again. Although the Volt uses gas as well as electricity, on a full charge, the Volt can get up to an estimated 61 kilometres gas-free.

Not just for commuters

This isn’t just a car for the commute. When the gas-generator kicks in, producing electricity to power the engine, the range of Volt extends by hundreds of kilometres with a full charge and a full tank of gas.

For more information visit:_Chevrolet+Volt_or read more in our post choosing-a-greener-alternative/