Board game for your little programmer! 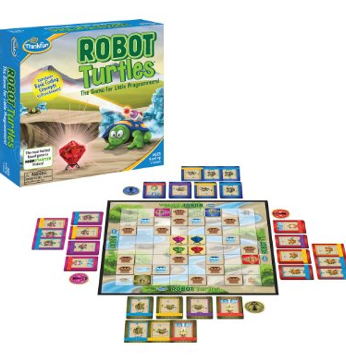 This summer, we took a look at introducing coding to children as young as three. Along with the numerous academic benefits, many social benefits were also highlighted. This month, we’re taking a look at a board game that introduces concepts of programming to preschoolers.

Robot Turtles started off as a Kickstarter campaign, and quickly made history as the most-backed board game in Kickstarter history with over $600K in pledges. While children don’t actually code, the game sneakily teaches children as young as three the fundamentals of programming.

Before the game even begins, parents and children can work together to put up barriers (ice walls and stone walls) to create the game board. The object of the game is simple: each player’s turtle must reach the jewels. The game board is customizable to make it as easy or as difficult as you would like, which prevents it from becoming boring for older children.

Robot Turtles can be played by up to four players. The players use the action cards to control the turtle’s movements in order to collect jewels. For advanced players, a function frog allows players to call a separate function within the program.

What makes Robot Turtles stand out from other board games?

For a game to work with preschoolers, the rules have to be simple. And, Robot Turtles is just that. Not only are preschoolers learning to think like a programmer, they’re understanding spatial concepts and learning new vocabulary. The turtles are fun characters to play with that will keep children engaged.

Despite its simplicity, by setting up a complex board and through the use of the advanced functions, players can be continually challenged as they become more experienced. The game is designed for simultaneous solitary play which means each player’s path to the jewels can be constructed according to the player’s skill level. This means that 3 year-olds and 8 year-olds can sit together and enjoy a game of Robot Turtles, without either age group becoming bored.

Dan Shapiro, the creator of Robot Turtles, had discussed the idea of Robot Turtles with people in the board game industry. He was told that the idea wasn’t marketable because parents weren’t interested in games they had to sit and play with their kids. Parents were far more interested in games that would engage their kids independently, freeing up their time to do something else. Shapiro could have just as easily created an app that operated in the same manner, but chose to stick with the board game idea. 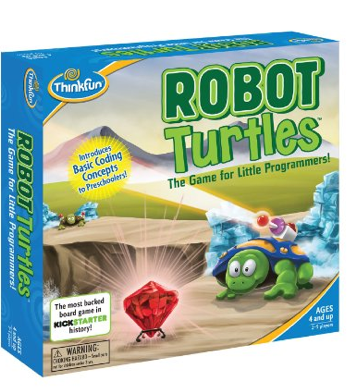 It is evident that children could use a little less screen time and a little more time socializing with peers and adults. Robot Turtles encourages communication between players as well as parent-child interaction. With children playing the different cards and parents moving the turtles, there is plenty of fun and learning to be had with this board game.

Can’t wait to get your hands on this board game? You’re in luck! ThinkFun and Masalamommas are partnering this month to giveaway a Robot Turtles board game this month!

All you have to do is leave your name below! Random draw will take place  Nov 14 and winners announced week of Nov 17th!

***Contest closes at 12AM EST Nov14. Contest open to US and Canada readers only.