Should Desis Care About #YesAllWomen?

The View From the Outside: Should Desis Care About #YesAllWomen? 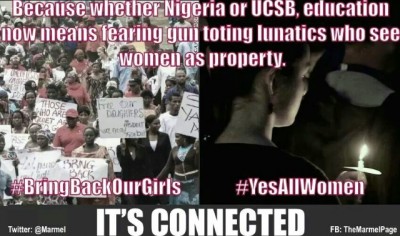 After the California shooting less than a week ago, when a man killed six and injured seven in a mass murder, feminists took to Twitter to respond to what was clearly a targeted killing by a young man who hated women.

The killer, whose name I will not repeat, left behind various YouTube videos, and even a 140 page manifesto detailing how much he detested women because they never wanted to date him, as he describes in the following passage:

I feel so invisible as I walk through my college. Your revealing shorts, your cascading blonde hair, your pretty faces. I want one for a girlfriend. I am polite. I am the ultimate gentleman. And yet, you girls never give me a chance. I don’t know why…

Initially, I tried to ignore when I began to notice my Twitter feed being consumed with the #YesAllWomen. “What could that possibly mean?” I asked myself. After weeks of following and supporting the intense #BringBackOurGirls hashtag, I was emotionally exhausted. This year has already been a really successful one for “hashtag activism”, and everything from fair-pay to ‘leaning-in’ at work has been advocated on Twitter to raise awareness and action.

But when feminist friends I respect, such as Soraya Chemaly and Elizabeth Plank, began writing and tweeting about patterns in the gun massacres taking place in America, the gendered impact of these mass shootings that are occurring on a regular basis, the online conversation turned personal.

Women from across mainly North America (check out this Twitter map here), and some in Europe started to share their own stories of harassment, rape, domestic violence. It was too emotionally raw to ignore. It was like a mass therapy session, or support group gathering online.

As a Bangladeshi-born feminist living in Washington DC, I have had my dose of condescending feminism that flatly excludes women of color. Many of us just cannot relate to mainstream American feminism. It doesn’t always include us or speak to us- literally. 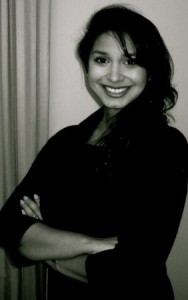 But that is changing, and the #YesAllWomen is an example of an online women feminist conversation that is very inclusive. It’s for all of us, and it demonstrates how violence against women unite women all over the world because we all experience, or know someone that has.

As American women start a hashtag to draw attention to the misogynist mass-shootings and killings, two days ago, half way across the world in Pakistan, a pregnant woman was stoned to death by male family members in broad daylight, as police reportedly watched outside a courthouse.

Recently, two Indian female cousins were gang-raped and then hung side by side on trees. In Sudan, a pregnant woman was sentenced to death for marrying a Christian man. The patterns exist and are consistent from DC to Darfur- men feel entitled to women and our bodies. Society allows men to think they should expect sex from women, and if that is not met than they can get violent to get their way.

Refusing sex, refusing a man and the repercussions that has for women filters into the recent horrific violent attacks on women in both India and Pakistan. In Bangladesh, you can buy a bucket of battery acid in the local market for ten cents, and men commonly do so to throw on women who have rejected or scorned them.

Say what you want about hashtag activism, be cynical and be dismissive, but there is no denying that women rule the Internet, and we are using it to mobilize and launch a modern movement for women’s rights.

The tweets go on, the statistics go on. The stories go on.