Opinion: ‘Banding Together Against Domestic Violence’ or Against Indian Culture?

The views expressed here are those of the author only and do not reflect the views of masalamommas.com.


This article was first published on Anu’s blog. 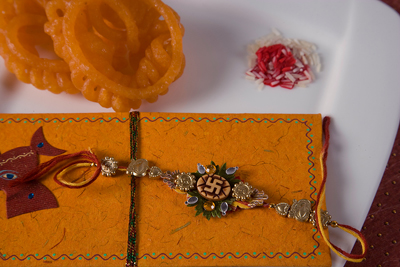 Rakhi, also known as Raksha bandhan or Rakhri, is an Indian festival that celebrates the bond between a sister and her brother.

The ceremony is fairly simple: sisters tie rakhi, a sacred thread, on their brothers’ wrists, and pray for their well-being and longevity. The brothers take a vow to love and protect their sisters for life.

The sacred thread is traditionally a simple red string, or it can be a fancy glittering one, or depending on affordability, real gold, silver or diamond bracelet.

Sweets are exchanged and the brothers traditionally give a gift to their sisters: a box of sweets or chocolates, a few dollars, clothes, or even jewellery.

It falls on a full-moon day in the Indian lunisolar calendar and this year it will be celebrated on Aug 2. So what has this simple Indian ceremony that celebrates a sister-brother relationship got to do with the issue of domestic violence?

Nothing. Except the Canadian City of Surrey thinks it can tie violence against women to Indian culture.

The City recently launched its second annual Rakhi project, “a Surrey Crime Reduction Strategy initiative designed to raise awareness about domestic violence”. I just found out about it, thanks to a photo, on my Facebook stream.

Rakhi project to raise awareness about domestic violence? What a gross misrepresentation!

Did I just google these facts?

No. I spent more than a year researching this topic for writing my thesis at The University of British Columbia. My thesis, titled, “Taking back the media: How South Asian diasporic media report on domestic violence against women in their own community” was submitted for the completion of my Master of Journalism degree at UBC’s Graduate School of Journalism.

So much for the facts and stats. What’s my point?

My point is domestic violence is a crime against women, but stop portraying it in a cultural framework. By saying that it is a problem with people of Indian, or broader South Asian heritage, you are saying it doesn’t exist in other communities. You are doing gross injustice to all women – both South Asian and non-South Asian heritage.

By constantly saying it is a South Asian problem, you are neglecting, women from Anglo (White), Asian, Aboriginal and other backgrounds, who are beaten and murdered by their boyfriends and husbands.

By associating the awareness around abuse against women with Indian heritage and festivals, you are saying that it is a problem with “your” community, you are the barbaric ones, you kill your women, and you are uncivilized.

By telling the community to solve the problem within the community, you are absolving your responsibility towards women of South Asian heritage. You are telling the women, who have been beaten by their husbands, their lives devastated, that go talk to your community and religious leaders, we have nothing to do with you, because it is your problem, you are the “Other”, the “Outsider”.

By associating the sacred and warm festival of rakhi with domestic violence awareness, you have wronged the community.

How do I support my argument?

Violence against women is a severe problem, but it is prevalent throughout the world. The main culprit is power imbalance in the society, not culture.  I am not defending a crime; I am defending a culture.

And I am not saying this based on emotions. I am talking facts, and research, data and quoting established studies.

I am not alone.

Apart from my own research, there is excellent academic scholarship that refutes violence against women is a cultural problem. Brilliant academic scholars such as Minelle Mahtani, Yasmin Jiwani, Sherene H. Razack, and Sunera Thobani have done tremendous work establishing how Canadian mainstream media continues to wrongly present violence against women in a cultural framework.

One of these scholars Minelle Mahtani, whose work I read, examined and quote in my study, argues that traditional journalistic understanding of ethics that revolve around balance, objectivity, and impartiality in news and reports do not do justice to the treatment and representations of minority groups.

Ms. Mahtani explains that society’s attitudes and beliefs are shaped by what the media discerns as public knowledge. When domestic violence in the South Asian community is time and again explained on cultural background, it only tends to reinforce the negative stereotype of a culture that is understood to be oppressive to women.

She suggests that negative depictions of minorities, in turn, give the message to the minorities in Canada that “they are threatening, deviant, and irrelevant to nation-building”. She calls these portrayals “damaging to the psyche” as they tend to instill inferiority complexes among minorities.

And that is exactly what is happening in the community. How many times I’ve had discussions with people of South Asian heritage who state it as a fact that the community is stooping to an all-time low by beating and killing its women? The community members themselves have started to believe that their culture is, in a way, responsible – this is exactly what Ms. Mahtani says happens through damaging portrayals of minorities.

My personal story of such damage:

Recently, my toddler accidentally bumped his head into my face. The area swelled and the impact left a huge blue/black mark under my left eye. When my husband saw me later in the day, he asked me to be careful when I step out or people are likely to think since I am of South Asian heritage, my husband must have beaten me. I didn’t think it was funny. Even if he said it as a joke, it was a hurtful joke, to think domestic violence is a cultural problem and is associated with only the South Asian culture.

What needs to be done:

If nothing else, the creators of the “Rakhi Project” should have done their homework well. It’s not too late: read one of the books written by the scholars I mention, or for a quick overview, contact me for a copy of my thesis work. I will be more than happy to provide one.

Yes, South Asian heritage women have been brutally murdered by their husbands, but so have been women of other racial and cultural heritage. Let’s get the dialogue out of the cultural framework and try and address the real issues around domestic violence.

The one body that does it well and in a fair manner is the South Asian diasporic media. I am not speaking out of any bias, but I established this through my research of frame analysis.

The United Nations outlines responsibility of the States in addressing violence against women, irrespective of the perpetrators, who could be state agents or non-state actors. It says:

“States are accountable to women themselves, to all their citizens and to the international community. States have a duty to prevent acts of violence against women; to investigate such acts when they occur and prosecute and punish perpetrators; and to provide redress and relief to the victims. While differing circumstances and constraints require different types of action to be taken by the State, they do not excuse State inaction. Yet States worldwide are failing to implement in full the international standards on violence against women. When the State fails to hold the perpetrators of violence accountable, this not only encourages further abuses, it also gives the message that male violence against women is acceptable or normal. The result of such impunity is not only denial of justice to the individual victims/survivors, but also reinforcement of prevailing inequalities that affect other women and girls as well.”

The State, in this case the City of Surrey, unfortunately, lived up to the fact-finding study of the United Nations.

So my dear elected and non-elected members of the City of Surrey, act on domestic violence in the correct framework. Free the festival of rakhi from this gross negative misrepresentation. People of South Asian heritage may be loud, because we love to celebrate, embrace and speak our hearts but we are not uncivilized. Stop depicting us as one. 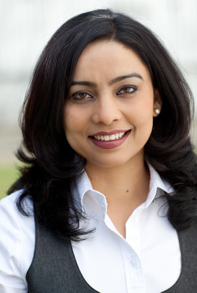 Anu Sandhu Bhamra is a Canadian journalist with transnational experience. An award-winning broadcaster, print and web reporter, Anu is an integrated journalist who has reported across major media platforms – print, television and web for over a decade.